This in no way diminishes the calamity of a war with China. But the ability of the U.S. to wage that war would not be diminished by having to fight Russia at the same time.
by
| 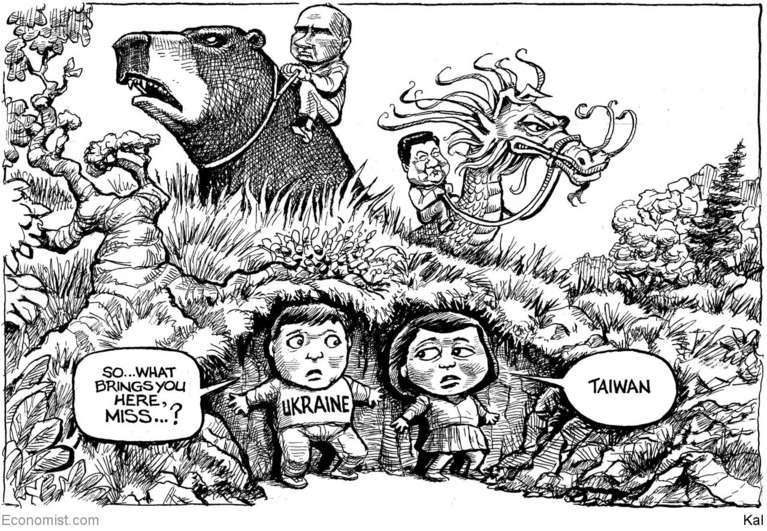 The question I’m getting the most is:

And for good reason, with headlines and analyses like these:

Concerning the ‘nightmare scenario’ itself - Russia attacks Ukraine and China invades Taiwan simultaneously or on Russia’s heels, and that the U.S. military is overstretched in a two-front war - I argue:

This in no way diminishes the calamity of a war with China.

More on all this below, but first…

1 | Happy Year of the Tiger

I have been wishing people Happy New Year this way in Chinese for a long time.

I was reminded by Malaysian-Chinese comedian (also of The Daily Show) Ronnie Chieng, who explains in ‘Why Chinese People Love Money’ on YouTube (my thanks to Axios for pointing this out):

The lines are a lot funnier when Mr. Chieng delivers them. Have a look at the whole thing.

Back to the 'nightmare scenario.'

In his excellent ‘The Overstretched Superpower: Does America Have More Rivals Than It Can Handle?’ in Foreign Affairs, Hal Brands says:

‘Over time, however, the two-war standard became impossible to sustain.’

‘The most glaring danger, highlighted by the concurrent crises in eastern Europe and East Asia, is that the United States could have to fight wars against China and Russia simultaneously.’

The good news: In the current crisis in eastern Europe the U.S. has no intention of fighting a war to defend Ukraine.

In ‘Aggressors working together: UK’s Truss warns China could follow Russia into war,’ The Sydney Morning Herald reports that British Foreign Secretary Liz Truss said China could use a Russian invasion of Ukraine as an opportunity to launch aggression of its own in the Indo-Pacific.

The White House however seems to be taking this possibility more seriously. Consider this from a press briefing by National Security Adviser Jake Sullivan:

The Chinese take is less subtle. This from the PRC-government-backed CGTN’s ‘Does the U.S. want to mess with the Taiwan issue as Ukraine flares up?’:

The ‘nightmare scenario,’ as NSA Sullivan’s questioner and Hal Brands put it, is unsettling. But for my part, as mentioned, I am in the camp of those who contend, as Michel Duclos and Francois Godement of the Institut Montaigne do in ‘Ukraine: China and Russia’s Calculated Mutual Support’:

To this I would add that this is an election year of Xi Jinping.

After the National Party Congress in the fall, though, the threat of invasion reemerges.

“Once the National Congress of the Communist Party of China is over in the fall of 2022, the scenario of armed unification will move toward becoming a reality.”

This could be just aimed at putting more pressure on Taiwan. ‘As for what Taiwan should do, Jin said it should enter into discussions on unification:’

So we can expect China to ramp up pressure on Taiwan – good for breaking the will of the Taiwanese people and for stirring up the nationalist spirit of their Mainland compatriots – both good increasing for Mr. Xi’s support among the Chinese people and keeping his enemies at bay.

After that? Well, you read what Dr. Jin said.