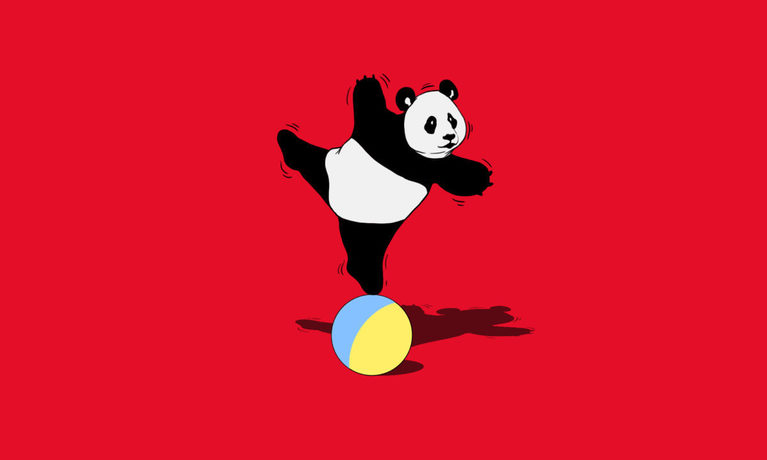 Illustration by Derek Zheng from SupChina

A looming risk is Russia-like sanctions on China.

The good news is that if China does violate the sanctions, the violations would likely be narrow and specific - even unintentional.

Still the risk is there, and assessing that risk requires assessing how likely any sanctions are. The ever-terrific Neopol newsletter (subscription – and well-worth it) put out by Trivium China suggests three scenarios:

One casualty of Russia-like sanctions on China would be the Biden China policy.

That criticism is well-countered in Josh Rogin of WAPO’s excellent ‘Biden doesn’t want to change China. He wants to beat it’ - a must-read. (I have had this teed up to bring to your attention since it was first published in February but have had to put it off until now to cover the impact of the Ukraine invasion). Mr. Rogin writes:

There are some who say that this isn’t enough.

What this otherwise good argument overlooks: Defining a U.S. endgame is tough when China has not yet defined its own. (World domination? Asian hegemony? Makes you miss the USSR where at least we knew where we stood.)

And while we’re talking about U.S. policy toward China...I got a kick seeing:

As long-time readers know, whenever I thought a Trump action against China was stupid (and that was pretty often), I would invoke the mantra:

President Reagan, having presided over the final strategy and actions that ended the Cold War, is my go-to for thinking about how the U.S. should deal with China.

Now the General is applying that mantra to give advice to the Biden team.

So far so good.

Here is more on sanctions and Biden China policy ('nuff said about Mr. Reagan and China).

But while doing that, the USSR stayed inside the tent of the international order and abided by international law, as much anyway as superpowers do.

China has benefited mightily from its participation in the international order, especially its economy.

So when Trivium China ’ Neopol ‘ game[s] out the potential likelihood that China may be in for Ukraine-invasion-related secondary sanctions,’ it is no doubt right that the first of its three scenarios, ‘Military support = game over’ is ‘exceedingly improbable.’

That leaves the third scenario – the one that Trivium is ‘most worried about’ – China’s ‘sleepwalking into sanctions.’

'Material Support' - and that means?

Still, inadvertent this third scenario would be. Because, as Trivium notes:

‘This is our concern with the term “material support” when it comes to China’s position toward Russia.’

‘If China unwittingly crosses a yet-undefined redline, the US government may feel compelled to apply secondary sanctions on one or more Chinese entities.’

This muddle isn’t unique to China and reflects the comments of a friend who is an expert on sanctions.

In the end, he said, many companies just say forget it and stop all business with a sanctioned country.

And, on the flip side, when some sanctions are lifted, companies are still reluctant to resume business in the formerly sanctioned areas for fear of taking a wrong step, thus slowing the effect of easing sanctions.

It’s easy to see then why Chinese companies and financial institutions will likely continue to err far on the side of caution.

The good news is that if China does violate the sanctions, the violations would likely be narrow and specific. (China knows, as Trivium notes: ‘Military support = game over’.)

And I tended to agree with him.

This is due in large part to ‘Biden doesn’t want to change China. He wants to beat it,’ by Josh Rogin of The Washington Post.

“Engagement has come to an end.”

‘Since Xi came to power in late 2012, the Chinese Communist Party has been expanding its military, intensifying internal repression and taking steps to undermine the Western-led system of free trade, rule of law and universal rights.’

‘To the surprise of many in Washington and Beijing, the Biden administration has largely followed Trump’s lead, keeping U.S. policy toward China on a more competitive — if not confrontational — footing.

‘A stable, if not exactly friendly, relationship.’

‘Step by step, the Biden team has put in place a tough China policy of its own design, more nuanced than Trump’s.’

‘This stiff but mostly consistent behavior is something Beijing could at least understand.’

“It’s a competition, and we intend to win it.”

'In November, CNN anchor and Post columnist Fareed Zakaria characterized the Biden administration’s approach to China as a failure because Beijing had not gotten on board.’

“I think it’s the wrong way to think about it,” Sullivan responded.’

‘An NSC spokesman said Biden’s team “is moving out in unison in executing our strategy” ’:

And a State Department official said':

(Reading that reminded me of Thomas Wright of Brookings’ piece last June in The Atlantic, ‘Joe Biden Worries That China Might Win.’)

Well, if ‘we intend to win,’ just what does winning look like?

The endgame with China, if it comes, probably won’t have that sort of moment of victory.

I attribute that to the difference between the U.S.-China conflict and the Cold War.

‘Good strategies articulate a desired end state and outline how to attain it,’ writes Richard Fontaine of the Center for a New American Security in ‘Washington’s Missing China Strategy: To Counter Beijing, the Biden Administration Needs to Decide What It Wants.’

‘Competition is merely a description of U.S.-Chinese relations, not an end in itself.’

This is an important critique.

But what makes defining a U.S. endgame tough is that China has not defined its own.

Until Beijing makes its aims clear, an aim just to outcompete China isn’t so bad.