Today, I’m sharing with you a bit of Ms. Schaefer’s analysis of the tech ‘crackdown’ (but not of the AI and algorithm law). She explains why...
by
| 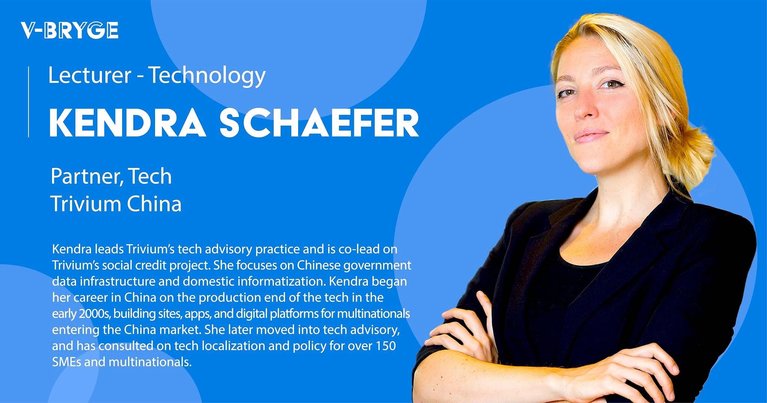 We recently had a terrific session of our monthly CHINARoundtable on Zoom with guest expert, Kendra Schaefer, a partner at Trivium China and one of the world's leading experts on China technology.

In this hour and a half CHINARoundtable session, she gave members insights into:

Today, I’m sharing with you a bit of Ms. Schaefer’s analysis of the tech ‘crackdown’ (but not of the AI and algorithm law). She explains why:

One framework I found especially valuable is Ms. Schaefer's description of the two opposing camps of regulators:

'Where the two camps agree is that big tech needs stricter regulation.'

BTW the CHINARoundtable members convene each month on Zoom for small-group discussions with leading experts on the big China issues.

‘It definitely still wants them to grow.’’

‘They want tech companies to have that mentality that:’

‘To these ends, they've created this trellis for companies to grow on, all while adhering to Beijing's standards and objectives.’

‘The question is: How big are the profits they can end up making while they're on the trellis?’

‘I always have to remind people: China thinks in 30-year timelines; they don't think on investor timelines.’

‘That's because the aim is to create a socialist market economy timel.'

‘Beijing is still sorting out what all this will look like over a 30-year period. In tech, they don't want Silicon Valley. So they ask:’

'We often talk to investors who ask, “But what about the market next week?” ’

‘They did start to care, however, when the Hong Kong indexes crashed – and that's a domestic investor concern – because this added to a weak economy and COVID pressures.'

‘So when the Hong Kong indexes crashed, they went:’

‘That’s how the government course-corrects most of the time - they definitely course-correct quickly if they see things start to wobble.’

Part Two | Is the “Crackdown Over”?

‘Is the “crackdown” of the internet platform companies over?’

‘Several of the regulatory campaigns we saw start last year have gained so much momentum that there's a 0% chance they get put back in the box.’

‘There are very interesting domestic politics that will determine:’

‘At the end of 2020, Chinese regulators kicked off this massive series of regulatory actions against Chinese big tech companies.’

‘Instead, you had multiple regulatory agencies that over the past two to seven years, depending on the agency, had been independently gearing up to tackle certain aspects of a very unregulated tech sector.’

‘The most impactful of those pushes, and the ones that got the most headlines were:’

‘And these two regulators are at odds with each other about what needs to be done.’

4 | ‘The Economists’ versus the ‘Risk Mitigators’

‘When it comes to regulating big tech, over the last couple of years we've noticed an interesting bifurcation into two big schools of thought in Chinese tech policy circles - two opposing regulatory camps:

‘The Economists.’ ‘The first camp we call “The Economists.” These are the guys who are looking at the macroeconomic big picture.’

‘These are the people whose Key Performance Indicators (KPIs) center around ensuring market stability and economic growth; increasing foreign direct investment in China; making sure Chinese companies can go abroad and list overseas; and increasing cross-border trade. That's what they care about.’

‘Their KPIs are not about the economy at all.’

5 | Where the Two Camps Agree

‘The objectives of the two camps are very different - but here's the kicker:’

‘We're not hearing any voices say that it's okay for tech companies to:'

‘Everybody's on the board with tech sector regulation and is pretty much agreed that the tech cannot continue behaving the way that it has.'

6 | Where the Two Camps Disagree

‘Where the two camps do disagree is on the timeline and methodology of how that regulation should be carried out.’

‘They contend "The Risk Mitigators" have failed to signal major policy decisions before they happen:'

‘The impact on internet companies has been very dramatic.’

‘Some of that slowdown was the Chinese economy and COVID.’

'And there, of course, have been all these other impacts as well.'

‘For the last year and a half, investors have been increasingly asking us:'

‘It took a while, but sure enough, recently, China's top economist, Vice Premier Liu He, chaired a very public meeting, very well-reported meeting of the Financial Stability and Development Committee (FSDC).’

‘In short, what Liu He and the FSDC are saying is:'

After that FSDC meeting, we got just a flood of phone calls from investors and reporters asking:

‘Liu He is not saying that regulation overall is a mistake.’

‘But that doesn’t mean just because Liu He said that he would like regulators to slow down or be more transparent, they will.’

SAMR. ‘For its part, the State Administration for Market Regulation (SAMR) has totally changed its tone and very differentially bowed to Liu He and Financial Stability and Development Committee (FSDC).’

‘We just looked into SAMR's annual budget: They have made a separate line item for anti-monopoly expenditure.’

CAC. ‘But the Cyberspace Administration of China (CAC) has made no announcement like SAMR's.’

‘The CAC has been all geared up for a year now to strictly enforce the new data laws that China released, namely, the Data Security Law and the Personal Information Production Law that came into effect last year.’

‘The CAC has also been screaming from the rooftops at every meeting that it's had that it plans to further tighten control on multiple other areas this year from the way tech companies use algorithms in AI – a huge and otherwise unnoticed change - to censor and online content control. Lots of noise around that.’

‘While it remains to be seen if the CAC takes the FSDC's message to heart, overall, we think that tech regulation won't subside.’

‘Hopefully, at least there's some movement in the direction of clear policy signaling a more measured approach and a little bit of a slowdown.’