The 20th Party Congress with All Eyes are on Xi Jinping

The attention to Mr. Xi is in large part because he will exit the Party Congress with even greater power, no discernible opposition, and a new five-year term (with more likely to follow). And many of the constraints that may have been in place not to jeopardize his reappointment will be gone.
by 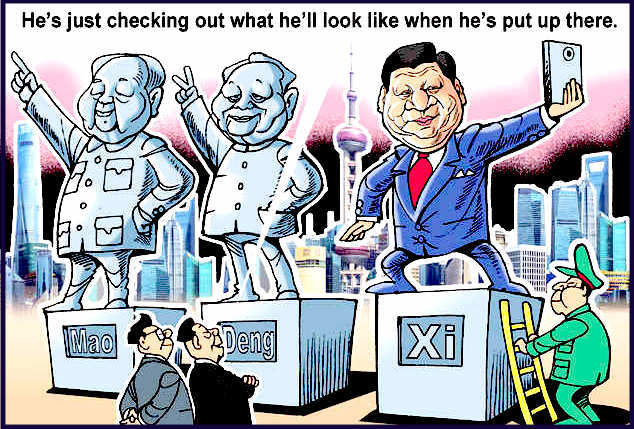 ‘All eyes are on Xi Jinping at the Chinese Communist Party’s 20th National Congress that begins on Oct. 16,’ says The Washington Post.

The attention to Mr. Xi is in large part because he will exit the Party Congress with even greater power, no discernible opposition, and a new five-year term (with more likely to follow).

With this in mind, here are two things to watch for after the Congress adjourns:

In considering these questions – and there will be many more fine analyses to come – there is a constant theme at play both before and after the Congress:

And this is key to understanding Mr. Xi’s policies and actions after the Congress.

And that theme recurs in today’s issue.Kevin Rudd, president of the Asia Society, former Australian Prime Minister, and astute China expert has just published a terrific analysis in Foreign Affairs:

Here are a few excerpts plus a real-world example of Xi the ideologue at work.
‍

‘In the run-up to the 20th National Congress of the Chinese Communist Party (CCP), Western analysts have sought to decode the worldview that drives him and his ambitions for China,’ writes Kevin Rudd.‘One important body of thought has been largely absent from this search for understanding, however:’

‘The omission is understandable.’

‘Xi has brought that era of pragmatic, nonideological governance to a crashing halt.'

‘In doing so, Xi is not constructing theoretical castles in the air to rationalize decisions that the CCP has made for other, more practical reasons.’

‘Under Xi, ideology drives policy more often than the other way around.’

For a real-world example, consider how shocked institutional investors were when they lost a trillion+ dollars in China’s tech ‘crackdown’ last year.

‘Traders began scouring Xi’s speeches to find clues about which industries might be next after his administration abruptly smashed the country’s $100 billion for-profit education sector.’

‍‘Global investors are shocked to have discovered that China is run by Communists.’

‘The most lucid and logically coherent explanation also happens to be the simplest:’

‘For decades, foreign investors have told themselves a comforting story.'

‍‘The big surprise from this week’s slump in Chinese company stocks is that people are claiming to be surprised.’

4 | The right side of history

More from Kevin Rudd: ‘Like all Marxist-Leninists, Xi bases his thinking on:'

‘These concepts may seem abstruse and arcane to those outside China.'

Historical materialism. ‘In his published writings, Xi deploys historical materialism to position the Chinese revolution in world history in a context in which China’s move to a more advanced stage of socialism necessarily accompanies the decline of capitalist systems.’Dialectical materialism. ‘Through the lens of dialectical materialism, he portrays his agenda as a step forward in an ever-intensifying contest between the CCP and reactionary forces at home (an arrogant private sector, Western-influenced nongovernmental organizations, religious movements) and abroad (the United States and its allies).’‘Marxism-Leninism still serves as the ideological headwaters of a world view that places China on the right side of history and portrays the United States as struggling in the throes of inevitable capitalist decline, consumed by its own internal political contradictions and destined to fall by the wayside.’

5 | Ignore at your peril

‘Xi’s ideological pronouncements shape how the CCP and its nearly 100 million members understand their country and its role in the world.’

Going back to China’s tech ‘crackdown’ in 2021, institutional investors got this message.

‍‘Traders began scouring Xi’s speeches to find clues about which industries might be next after his administration abruptly smashed the country’s $100 billion for-profit education sector.’

‍‘ “Investors and analysts have tended to dismiss party-speak, usually because it’s so impenetrable,” said Dan Wang, a technology analyst at Gavekal Dragonomics in Shanghai, who regularly reads the Qiushi Journal, a bi-monthly Communist Party publication.’

‘ “And we should know at this point that Xi usually follows through on what he says.” ’

‍‘When politics are in command, the markets-based models Western financiers use to calculate China risk aren’t much use.’

These are from the investment world.

To get you started, here’s the link to the English version of Qiushi.

And keep an eye out for speeches by Mr. Xi and other leaders.

Ignore at your peril.