Ever since Xi Jinping announced ‘One Belt, One Road’ in 2013, I watched it expand China’s economic and geopolitical influence and lay the foundation for projecting its military power – and become by many accounts an exploiter of the developing world itself.
by
| 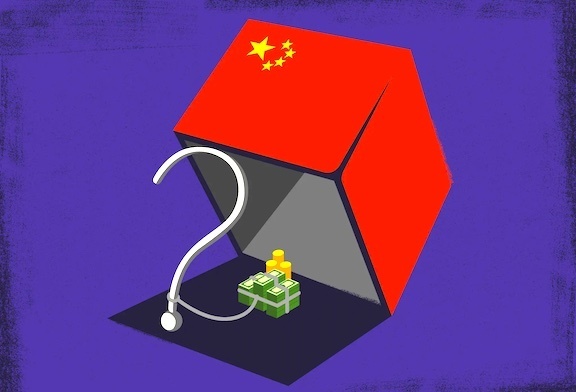 from The New York Times

On Sunday, the G7 announced the launch of the:

The PGII aims to be an alternative to China’s ‘Belt & Road Initiative’ [BRI] for developing countries seeking, well, infrastructure and investment.

Details about the PGII are sparse.

The BRI hasn’t been in the news a lot in the past couple of years. And for good reasons, three of which are:

At the same time, demand is down.

As for the loans already made?

The result, ‘China itself has fallen into the debt trap it dug for others,’

And that looming debt crisis has created a dilemma for China - a dilemma the resolution of which will impact the economies of both China and the BRI-recipient nation:

As Dr. Pei says, ‘China has few good options to climb out of this hole it has dug for itself.’

Meanwhile the PGII is on the march.

Sri Lanka is a cautionary tale about how accepting BRI projects can go wrong for a country. Dr. Pei says:

‘The South Asian country's foreign debt has reached $38.6 billion, about 47% of its GDP.

‘In early 2022, Sri Lanka could not repay the nearly $7 billion debt that came due.’

Not everyone blames Sri Lanka’s woes on China and BRI debt but instead on longstanding mismanagement of the economy and corruption.

In February 2021 (before the above account about Sri Lanka), The Atlantic published ‘The Chinese ‘Debt Trap’ Is a Myth.’

‘As Michael Ondaatje, one of Sri Lanka’s greatest chroniclers, once said, “In Sri Lanka a well-told lie is worth a thousand facts.” ’

And ‘Debunking the Myth of ‘Debt-trap Diplomacy,’ a 44-page analysis from Chatham House, asserts:

But whether by intention or happenstance, the BRI has left China with, as Dr. Pei says, ‘a debt crisis of its own making.’

‘With global economic conditions bound to deteriorate further,’ writes Dr. Pei, ‘many other developing countries are, like Sri Lanka, expected to default on their foreign loans.’

‘Following Russia's invasion of Ukraine, high inflation, rising interest rates, and a looming recession in the U.S. and Europe, many poor countries are facing the worst economic crisis since the near-meltdown of the global financial system in 2008.’

‘Pressuring insolvent governments to service loans in the middle of an economic crisis will be futile and counterproductive.’

Recognizing the mess the BRI has gotten it into, China is rethinking the initiative – and something very different may emerge.

If you are an adherent to the 'debt trap' narrative, this benefits those nations.

‘Since the COVID-19 pandemic started,’ write Alicia Garcia-Herrero and Eryk Freymann  in ‘A new kind of Belt and Road Initiative after the pandemic,’ the BRI has faced four short-term macroeconomic headwinds in four ways:’

‘The longer China remains locked within its borders, and the deeper the Chinese economy slides in the second half of 2022, the harder it will be to maintain the same level of ambition.’

‘The pandemic’s negative economic effects on many developing countries have also reduced interest in the BRI.’

‘This has made Chinese banks and firms relatively less interested in projects in many of these countries.’

‘Many BRI projects underway before the pandemic appear to have been abandoned.’

‘Notwithstanding these challenges, the Chinese government does not seem ready to abandon the BRI.’

‘If anything, it is more important than ever as China needs to build alliances in its strategic competition with the US.’

‘The BRI is transforming from an infrastructure-led project to a more political one where soft, and even hard, power is central.’

‘China seems to be losing interest in funding infrastructure and would prefer to increase its soft, and possibly even hard, power through other means of influence.’

‘Reflecting some of these concerns, in February 2022 Politburo Standing Committee member and chairman of the Leading Small Group responsible for the Belt and Road, Han Zheng, said:’

‘This is much more in line with China’s broader domestic goals, as financial resources are increasingly needed within its own borders.’

Part 3 | The Empires Strike Back

Ever since Xi Jinping announced ‘One Belt, One Road’ in 2013, I watched it expand China’s economic and geopolitical influence and lay the foundation for projecting its military power – and become by many accounts an exploiter of the developing world itself.

China has been filling the very real need for infrastructure throughout the developing world.

Now almost ten years after the start of the BRI the G7 has responded as a group.

On Sunday, at the G7 meeting, President Biden announced that the Group of Seven has pledged $600 billion in private and public funds over five years to finance needed infrastructure in developing countries, the:

In his announcement, Mr. Biden said:

In an implicit jab at China, the President also said:

The PGII is intended, as Jake Sullivan, the US national security adviser and an important member of the project has said, to be ‘an alternative to what the Chinese are offering.’

That said, while the PGII – if it’s implemented as outlined - will no doubt build a lot of infrastructure, it’s tough to see how it will have 'greater than the sum of its parts' impact on geopolitics and security as the BRI has.

The BRI and PGII are now in competition in the developing world.

1 | Out of Africa (and the rest of the developing world)

My focus has always been China.

My impression, in the broadest terms, is that powerful countries:

My impression also is that there is a strain of extreme thinking about developing nations reflected in former President Trump’s comment about Haiti, El Salvador, and African nations being ‘shithole countries.’

[I will no doubt get – and welcome – comments challenging my impressions.]

China's relations with the developing world have taken a very different course.

As Hong Liu of Nanyang Technological University in Singapore points out in ‘China engages the Global South: From Bandung to the Belt and Road Initiative’:

In our time the most potent expression of China’s efforts is the BRI.

But those long efforts are in jeopardy - as is China's perceived role as champion of the 'Global South.

Much of the outcome depends on whether one can remember its roots and the other can avoid the worst of its traditional tendencies.