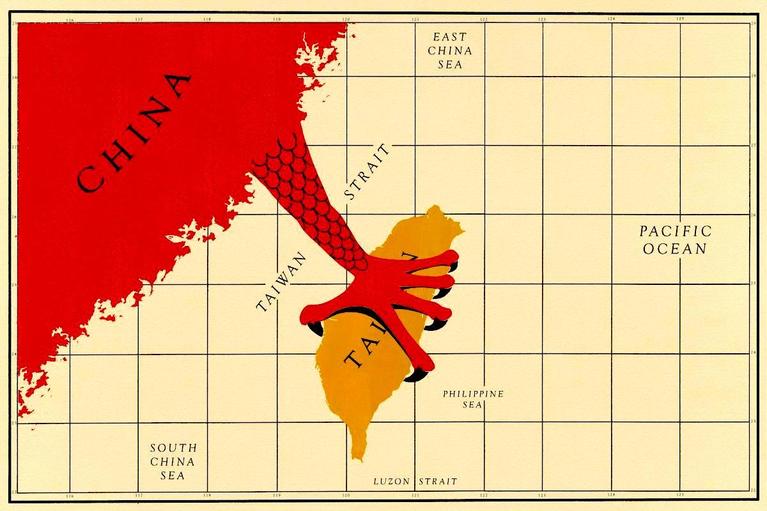 Forget Evergrande and the energy crunch. After the recent flurry of alarming headlines, here’s the question I get most often these days from CEO’s and institutional investors:

The reason is Xi Jinping himself.

In his quest for control of Hong Kong and the South China Sea, Mr. Xi didn't start shooting but instead, as Sun Tzu counsels in the Art of War, he ‘subdued his enemies without fighting.’

So far that’s been a campaign of economic, political, and diplomatic pressure; increasingly more frequent and larger military overflights; and a rapid military buildup that is threatening enough in itself - but Mr. Xi still has lots of other options short of an invasion.

My longer answer to the question: Will China invade Taiwan?

Note: Here's another question I get a lot:

Throughout the history of warfare, the side about to retreat or to be defeated aims to leave nothing of use to its adversary.

China has no doubt factored this probability into its assessment of invasion and concluded that capturing the fabs intact would be an unexpected windfall - but not the aim of an invasion.

For westerners, Sun Tzu’s Art of War has become the stuff of the books on business strategy we buy at airport kiosks.

Xi Jinping seems to have taken this to heart.

Instead, Mr. Xi chose a third way, which, even though deplorable, could be called elegant:

Xi subdued Hong Kong without fighting, ‘the acme of skill.’

When Mr. Xi decided to bring most of the South China Sea under Chinese control he employed 'salami slicing.'

No one would go to war over one little pile of rocks or artificial island, or the next one, or the one after that.

Brunei, Malaysia, the Philippines, Taiwan, and Vietnam have all lodged competing claims for some or all of the islands, calling China's occupation illegitimate (as did the decision of an international tribunal that rejected China’s territorial arguments but which China refuses to accept or abide by).

But when the U.S. and other more powerful nations conduct ‘freedom of navigation’ cruises in the South China Sea, China protests the ‘trespass’ of its territorial waters and engages in provocative near misses – and that’s it.

So far with Taiwan, Mr. Xi has been true to form.

He is bullying Taiwan with economic, political, and diplomatic pressures as well as military overflights, and with the rapid - and very threatening - buildup of the Chinese military itself, all to break the will of the Taiwanese people and to convince the government that it stands alone against a powerful and implacable foe.

Here are three of the biggest and riskiest of those options, all akin to 'salami slicing.'

First, he could impose an air or sea blockade of Taiwan seeking to starve Taiwan of trade and food until it capitulates to Beijing’s demands.

Second, he could seize a few small Taiwan-controlled islands immediately off China's mainland coast – the most discussed are the Pratas Islands (shown on the map below) ever since China increased military overflights and conducted amphibious landing drills nearby.

Third, he might extend the already frequent and increasingly large military overflights, shown on the map below,  beyond Taiwan’s ‘Air Defense Identification Zone’ (ADIZ) closer to or even into the sovereign airspace that extends 12 nautical miles from the main island of Taiwan.

All these options and others are meant to bully Taiwan and have a similar feel of China’s ‘salami slicing’ employed in the South China Sea.

And any of these could demoralize the Taiwanese people and erode their confidence in their government and military to protect them – and in turn make them more willing to peacefully rejoin the Mainland.

Short of these dramatic measures, Mr. Xi has a bevy of lesser options from ramping the already intense disinformation campaign, cyber intrusions, and interference in Taiwan elections to disrupting Taiwan's power grid and cutting undersea cables.

‘At the same time that it ramps up its military activities in the strait, China will continue its broader diplomatic campaign to eliminate international constraints on its ability to use force, privileging economic rights over political ones in its relations with other countries and within international bodies, downplaying human rights, and, above all, promoting the norms of sovereignty and noninterference in internal affairs.’

‘All these coercive and diplomatic efforts will move China closer to unification, but they won’t get it all the way there.’

If Xi Jinping concludes that bullying and ‘salami slicing’ won’t work - and that nothing short of invasion will bring Taiwan into China’s fold – he may well decide to attack.

In other words, will China invade Taiwan in the next few years?

No invasion unless Mr. Xi is provoked. As Bonnie Glaser, director of the Asia program at the German Marshall Fund, put it:

For all the discussion of impendence, Taiwan so far has steered clear of making any real moves that would provoke China.

As for nuclear weapons, Taiwan started a secret nuclear program two times in 1970s and ‘80s -  both times the U.S. pushed to shut them down.

As for U.S. troops permanently in Taiwan, the only scenario I see for that would be stationing them there after the defeat of a Chinese invasion when all previous U.S. commitments to China would have evaporated anyway.

These are just a few of the risks Mr. Xi faces if he calls for an invasion and fails.

In a fight between China and Taiwan alone Mr. Xi knows he has Taiwan outgunned.

He also knows that for all his military advantage, factors such as terrain (none of the 14 Taiwan beaches where Chinese troops might land are suitable for an amphibious landing – and those beaches are well-fortified), Taiwan's strong defensive capabilities, the prospect of a long counter-insurgency fought from Taiwan’s mountains and in the streets, and the difficulties of managing a hostile population, make complete victory costly and far from easy.

But most of all, Mr. Xi knows is that if he attacks Taiwan, he will very likely also face the U.S. and probably its allies.

Taiwan is like the little kid a bully wants to beat up but is too afraid of the kid's big brother to do it.

So far Mr. Xi doesn’t have the stomach - or the military confidence - to risk a direct confrontation with the U.S.

In this, he reflects the robust debate going on in the U.S. itself on the questions:

Untangling the arguments around the second question is beyond my expertise.

Not only does support appear to be coalescing in Congress, but 'just over half of Americans (52%) favor using US troops to defend if China were to invade the island,' reports the Chicago Council on Global Affairs.

Then there is the president. During a recent CNN Town Hall, President Biden was asked: 'Can you vow to protect Taiwan?'

The U.S. in fact does not have such a commitment.

As for a Chinese attack on Taiwan, for 40 years, the U.S. has pursued a policy of 'strategic ambiguity,' where it has been - and is - deliberately vague about what it would actually do if China were to invade.

After Mr. Biden's remarks, a State Department spokesman was quick to say that Mr. Biden’s comments did not signify a change in policy.

Either way, Mr. Xi heard perhaps Mr. Biden’s own belief on the matter.

But Mr. Xi knows Mr. Biden will only be in office for four or eight years, and then he will have a new president with his or her own take on Taiwan’s defense to deal with. Here's one indication of how a new U.S. president might lean:

If all his other efforts to bully Taiwan into submission fail, and he is left with only invasion to achieve his aim, Mr. Xi's determination of U.S. will and capability at that will be the deciding factor.

8 | It All Comes Down To Xi Jinping

‘Liberate Taiwan and Complete [China’s] Unification’ (from around 1950)

Neither Taiwan nor the U.S. (and its allies) wants a war with China.

Ever since, the PRC’s leaders have sought, but failed, to ‘reunify’ Taiwan with the Mainland and to tie up the last loose end of the Chinese Civil War (1927-1949).

But as a quip in China goes: 'With Mao, we stood up; with Deng, we became rich; with Xi, we will become strong.'

For Mr. Xi, Taiwan reunification is a part of his signature initiative, the ‘China Dream.’

To many, all this amounts to the greatest threat of a Chinese invasion of Taiwan since the founding of the PRC.

As noted, Mr. Xi seems to have absorbed Sun Tzu’s adage: ‘To subdue the enemy without fighting is the acme of skill.’

He is pursuing the same strategy with Taiwan.

All by way of answering my original question - will China invade Taiwan in the next few years? – with a no.