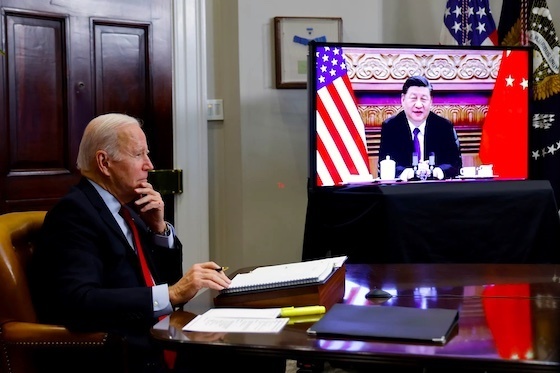 Of late, the spotlight has been on Xi Jinping.

And Mr. Xi was one side of the first face-to-face, albeit virtual, call with President Biden.

Mr. Xi's jaw jaw to Mr. Biden was summed up by The Economist this way:

But as we know, in all fraught relationships there are two sides to the story.

Not that you would know that if you read only the also inevitable hits from the right.

Mr. Bolton  points out that

Many before Mr. Biden though have tried to be the George Kennan (who came up with the strategy of containment that eventually ended the Cold War) of the age and failed.

And Mr. Bolton suggests a path that I fully associate myself with:

That debate is long overdue.

Anyway please have a look at my take on these issues and be sure to read Dr. Saich and Mr. Bolton's essays.

1 | And Then There Were Three

‘The historiographical equivalent of bulldozing a cemetery.’

The Resolution that shows how Xi Jinping's leadership is 'the inevitable outcome of history' is a little long, a little tedious, but a must-read or at least a must-skim to understand how the Party – and more importantly, Xi Jinping – have decided they want to be viewed.

The Resolution was recently adopted at the recent Sixth Plenum of the Chinese Communist Party.

The Sixth Plenum of the cycle is the big deal.

For Mr. Xi too, the Resolution brought him closer to being seen as an equal to Mao and Deng.

‘The first two resolutions criticised the past to legitimise setting out on a brave new path forward.’

'Barring an accident of nature, Xi will be reappointed for a third term as party general secretary at the 20th party congress (to take place in November 2022).'

I have written before that we could look at Mao, Deng, and Xi as three leaders who performed experiments to shape China each in his own vision.

For now, as Dr. Saich says,

‘However, when politics is so deeply personalised and centralised, there is only one person to blame if things go wrong.’

The Objective Take. ‘After nearly 10 months of open hostilities between China and the United States since Joe Biden took office in January, the first face-to-face meeting between him and Chinese President Xi Jinping has brought a sigh of relief around the world,’ writes Wang Xiangwei of the South China Morning Post.

The Chinese Take. According to The New York Times:

‘The policies that the United States has adopted toward China for some period of time have pushed Chinese-U.S. relations into serious difficulties, and this is out of step with the fundamental interests of both countries’ peoples and the shared interests of every country in the world,” Mr. Xi said, according to a summary of the call issued online by the Chinese Foreign Ministry.'

Or, as The Economist story’s subheading sums it up:

More from The Economist on the call that highlight the difficulty of the two sides reaching some accommodation:

‘In China’s telling, American inflation is linked to Trump-imposed trade tariffs (though inflation is recent and tariffs have been in place for three years).’

‘With the American economy now in “bleak” shape, the Biden administration “needs to ease relations with China in order to improve its political standing at home”, says Wang Yong, director of Peking University’s American studies centre.’

Talk about a tough audience.

The U.S. (Partisan) Take. John Bolton in his Wall Street Journal op-ed [more from that below] on the call, ‘Biden Has a Summit with Xi, but No Strategy for China,’ writes:

As for the call itself, I am in the camp of those many pundits who quoted over and over Winston Churchill that it is better to ‘jaw jaw than to war war.’ Not Mr. Bolton.

China has oft-stated objectives and clear, if evolving, policies for attaining them.

The United States doesn’t have one yet.

For, as Mr. Bolton so rightly points out:

The problem of course is that the best strategies from the U.S. and China, no matter how well they are shaped and how clearly communicated, may be so inimical that armed conflict cannot be avoided.