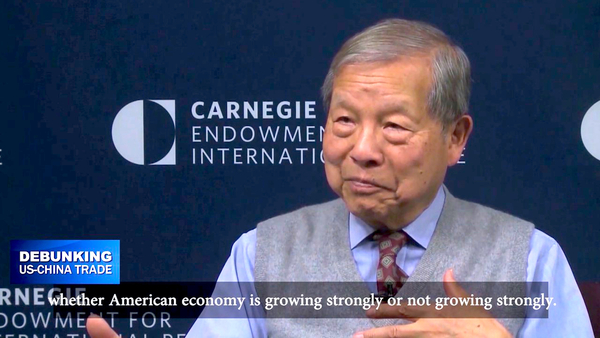 1. Of the Tensions among Individuals, Corporates, and Governments

2. Why We Need Stronger Global Institutions

Of the Tensions among Individuals, Corporates, and Governments

‘The trade war was actually about the dissemination of knowledge, knowledge transfer, technological transfer.’

Yukon Huang is a great – and influential – contrarian.

I have often said that no one has influenced my thinking on any individual China issue than Yukon.

Yukon is a senior fellow with the Asia Program at the Carnegie Endowment.  ·

‘The problem we have is that the factors that shape the behaviors of individuals, firms, and governments are different.’

‘Let me illustrate. What was the trade war really about?’

‘All growth, whether it's the U.S. and China, ultimately is the result of knowledge being shared.’

‘At the individual level, the sharing of knowledge is a public good, which everyone likes and supports.’

‘The same is true across nations.’

‘Over the last couple of decades emerging markets have led that increase in growth triggered by gaining the knowledge from the rich countries.’

‘But this creates a tension because it’s seen as being unfair.’

‘Firms are different. Firms, when they capture knowledge and innovate, make money, and they want to protect it.’

‘So there's a balance in terms of allowing firms to share knowledge and allowing them to capitalize and gain from it.’

‘But there's a problem because increasingly firms are producing more innovative products which have dual-use or security implications.’

‘So when a lot of these dual-use products are being sold to China, then the government steps in.’

‘Now you have the U.S.-China trade tension. But it's actually a technology tension. And the problem is basically this.’

‘A great irony. We need global institutions or arrangements to deal with trade, technology, and health because individuals, corporations, and national governments cannot.’

‘So now we have this big debate about decoupling or not decoupling, and we realize that this has negative consequences for everybody.’

‘We weren't able to resolve this through the Phase One trade deal.’

‘Herewhether it's on trade or knowledge that structure is the WTO.’

‘So, we're missing a global institutional arrangement that could balance commercial interests and global security concerns.’

‘Well, the question is, can we? And the answer is we can because we've done it before: Nuclear proliferation. Landmines. Climate change.’

‘Then on the pandemic, the WHO is a logical institution to say we need to maintain inventories. We need to share the vaccines and medicines. We need to make sure the information is available. And we need to be able to enforce rules across countries because individually countries themselves won't do it.’

‘Again a great irony. We need global institutions or arrangements to deal with trade, technology, and health because individuals, corporations, and national governments cannot.’