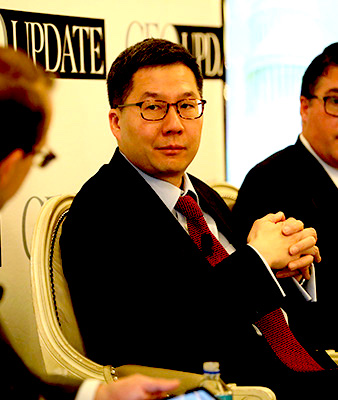 ‘I have seen senior executives who take on very public roles within some of these Chinese companies find that their life after those companies has been more limited. It even has a bit of a taint. A bit like working for tobacco.’

Malcolm Riddell:‘How does China fit into the work you're doing in executive search?’

Julian Ha:‘Just a few years ago, some of the very large Chinese conglomerates - the Anbangs, the HNAs, and the Wandas, and the Huaweis - were all expanding globally but in the U.S. in particular.’

‘More recently, we've seen the other side of the coin.’

‘But also because of the uncertainty created by the retraction from the U.S. and the rise of anti-China sentiment, the Chinese companies that are still in the game in the U.S. are having a much harder time recruiting talent.’

‘And they may be right.’

‘I've done some work for some of those Chinese companies, and it was much harder.’

Malcolm: ‘That would probably go back, as you said, to the whole question of the Entities List, blacklisting, and the like. How has that had an impact on your work?’

Julian:‘In my practice area - I spearhead our firm's government affairs and public policy work, there has actually been a more compelling need to hire advocates to represent these companies even more vigorously and robustly. But therein lies the challenge.’

Malcolm: ‘And I would assume that's also for less controversial companies. If you're buying real estate, it's probably not the same as having a question as to whether or not you're a potential intruder into U.S. security systems.’

Julian: ‘That's right. I think Alibaba is a good example.’

Malcolm: ‘How impact do you think the Biden administration’s China policy is going to have on what you're doing with the Chinese companies?’

Julian: ‘I think the Biden administration is going to continue to toe the tougher line because I think the Democrats realize that a soft-on-China policy is not going to resonate with many of the voters that supported them.’