The U.S. Chamber of Commerce 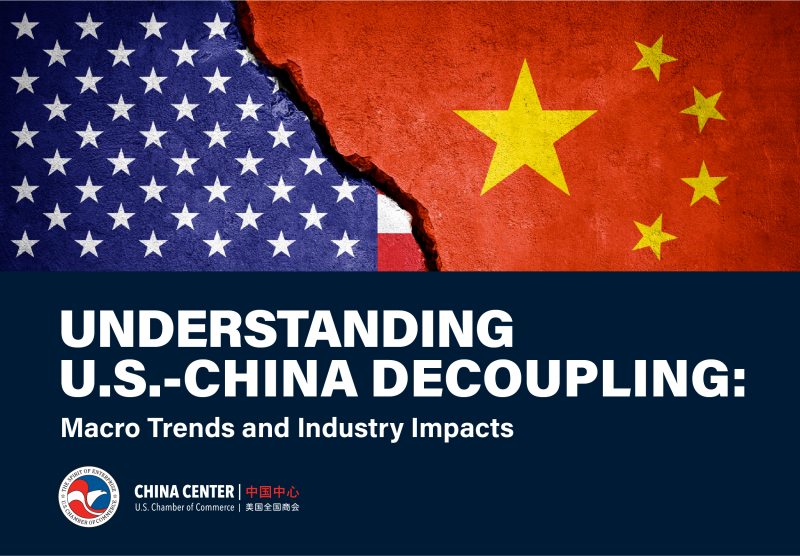 BIG IDEA | ‘Comprehensive decoupling is no longer viewed as impossible: if the current trajectory of U.S. decoupling policies continues, a complete rupture would in fact be the most likely outcome. This prospect remains entirely plausible under the Biden administration.’

BIG IDEA | 'The study highlights the potential costs of decoupling from two perspectives: the aggregate costs to the U.S. economy and the industry-level costs in four areas important to the national interest.'

‘The surge of Trump-era economic decoupling policies in the U.S. is rooted in national security concerns about the fusion of state strategic interests and private commercial motivations in China, as well as growing asymmetries in market access and the terms of global competition. China has long had industrial policies designed to bolster national strength both in security and material terms.’

‘First, across seven decades, those policies typically did more developmental harm than good, and the gap between U.S. and Chinese capabilities was not closing.’

Second, there were effective advocates for a less statist, more market-oriented solution to China’s economic questions in Beijing.’

‘Comprehensive decoupling is no longer viewed as impossible:’

‘Many U.S. firms are making visible adjustments to prepare for or hedge against such an outcome, and firms from other parts of the world are asking whether they will be the beneficiaries or, rather, if their own home governments will follow suit.’

‍From 'targeting decoupling' to comprehensive decoupling: the U.S. Chamber of Commerce, with the help of the Rhodium Group (the true author, no doubt), roughly tallies up the high cost of decoupling. And high those costs are.

But the really surprising suggestion is that comprehensive decoupling is 'entirely plausible under the Biden administration.'

Huh? That wasn't plausible even under the Trump administration and its efforts to strong-arm U.S. companies. Couldn't happen then; won't happen now.