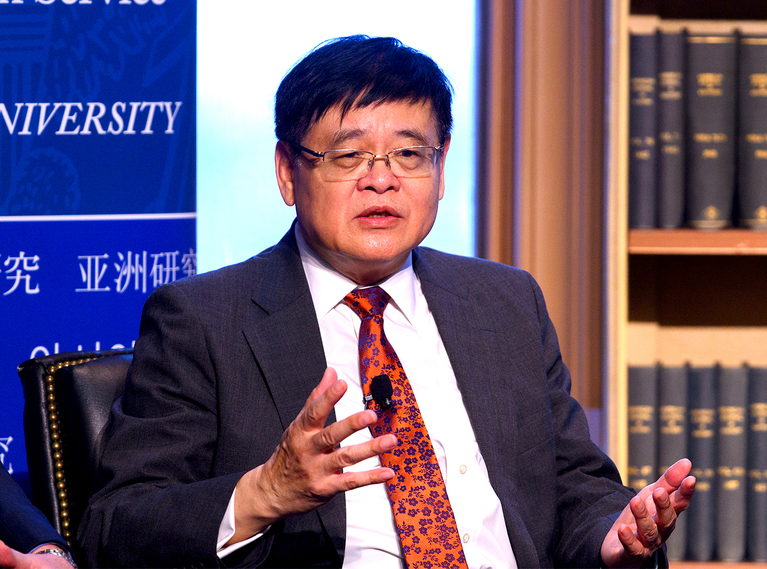 ‘In Chinese eyes, the most significant threat to China’s sovereignty and national security has long been U.S. interference in its internal affairs aimed at changing the country’s political system and undermining the CCP.’

The author is Wang Jisi.

And Mr. Wang seems to have insulation that allows him to speak his mind more openly than many others.

The report deviated from the usual line, saying, ‘Both the U.S. and China will lose from “decoupling.” And at this point, it looks like China’s loss may be greater.’

This week, I came across ‘Wang Jisi: Has America declined? Chinese people should have a clear understanding’ [‘王缉思: 美国到底有没有衰落? 中国人应有清醒认识’], an interview that Mr. Wang gave in May. (David Cowig provides a translation here.)

He notes that the views are his own, and certainly we don’t know how closely, if at all, they reflect the thinking of anyone in the leadership.

The interview is very long (but well worth reading in full). Below are excerpts representing some Mr. Wang’s key points.

But you will better understand the Chinese point of view on U.S.-China relations, or at least that of an eminent and influential Chinese scholar.

1 | ‘I am skeptical of the assertion that the U.S. economy is in decline.’

Q: ‘Compared with more than 20 years ago, do you think the United States is in decline?’

Wang Jisi: ‘I am skeptical of the assertion that the U.S. economy is in decline.’

‘Objectively speaking, the overall national strength of the United States is basically stable, but this does not seem to be the mainstream view at home and abroad.’

‘Nevertheless, the overall economic strength of developing countries is rising and that of developed countries overall is declining.’

‘Most of the discussions on “whether the United States is in decline” are from a political perspective.’

2 | ‘The only approach the United States can take is to strengthen its competition with China, isolate China in the world, and put China in a passive position.’

Q: ‘What do you think are the characteristics of the Biden China strategy?

‘First, the starting point is to strengthen America’s own power.’

‘Second, the U.S. wants to unite with some other countries in the world to jointly restrain China, and to establish a multilateral camp against China.’

‘If there is a third point, it is that the United States believes that future competition is mainly a contest of national governance capabilities.’

‘Recognizing that there is nothing it can do to “change China,” the Biden administration can only look to exploit possible Chinese “policy mistakes” to weaken China.’

‘So the only approach the United States can take is to strengthen its competition with China, isolate China in the world, and put China in a passive position.’

3 | ‘The U.S. does not believe that other civilizations can have its vitality and universality.’

Q: ‘How is this different from the U.S. strategy toward the Soviet Union during the Cold War?’

Mr. Wang: ‘When it comes to the difference between the current U.S. strategy toward China and the strategy of containing the Soviet Union during the Cold War, I think it is more reflected in the impact of the differences in civilization and race between the two sides of the game.’

‘This brings up the issue of race.’

4 | ‘Even “partial decoupling” is very difficult to do.’

Q: ‘Can the Chinese and U.S. economies really decouple?’

Mr. Wang: ‘China and the U.S. are inseparable economically, and economic interests will play a very big role between the two countries.’

‘The economic and trade structure of the two countries determines that the complete “decoupling” of the United States and China is impossible.’

‘From this perspective, the United States cannot completely “decouple” from China.’

‘While for China, there would even be the risk of “strangulation”, so we still have to continue to insist on opening up to the outside world.’

5 | ‘I don't think there has been any fundamental change in the U.S. policy towards Taiwan.’

Q: ‘Do you think the U.S. government's Taiwan policy is undergoing fundamental changes? If there is war in the Taiwan Strait, will the United States intervene?’

Mr. Wang: ‘I don't think there has been any fundamental change in the U.S. policy towards Taiwan.’

‘The U.S. is ambiguous on this issue, recognizing only the government of the People’s Republic of China as the sole legitimate government representing China.’

‘These three sentences are linked together.’

‘In my opinion, the U.S. does not fully support "Taiwan independence".’

‘For the U.S., the best state of affairs is that Taiwan is neither under the control of the Mainland, nor does it transform itself into a legally “independent Taiwan”.’

‘What the United States has always supported is that Taiwan is neither reunified nor independent.’

‘The Biden administration has increased its efforts to use the Taiwan issue as a bargaining chip to pressure China.’

‘As for whether or not the U.S. will intervene in the Taiwan Strait, and the extent of its involvement, I think it is difficult to pre-determine.’

‘We must retain the option of "using force against Taiwan" as bottom-line thinking.’

‘I believe that China has already developed plans for the eventual use of force if that should become necessary and that plan includes preparations for a possible U.S. involvement.’