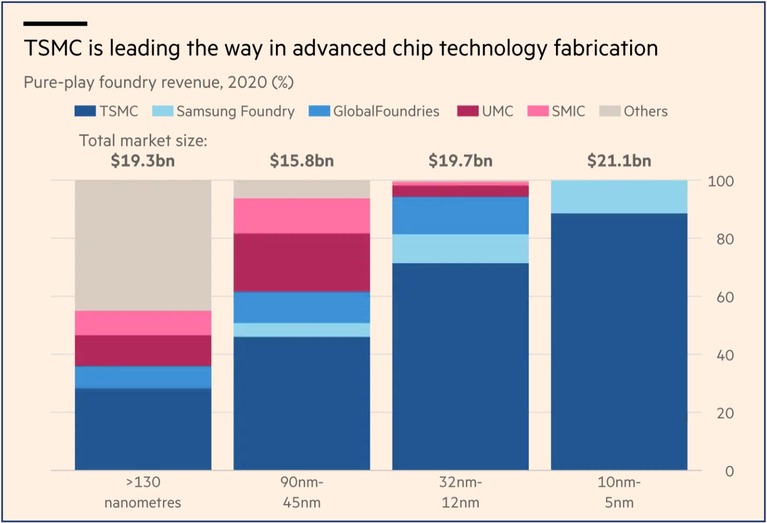 BIG IDEA | ‘Taiwan Semiconductor Manufacturing Company (TSMC) has maintained its historic position of neutrality, reflected in the company’s strategy of “being everyone’s foundry”.’

‘Now the big question for TSMC and other Taiwanese groups on whether to commit themselves to the larger US market, or to faster-growing China.’
‘Taiwan Semiconductor Manufacturing Company, the world’s largest contract chipmaker is under pressure to pick a side in the US-China rivalry for technological supremacy, posing a dilemma for a company that has become crucial to the global supply chain.’

‘The big question for TSMC and other Taiwanese groups on whether to commit themselves to the larger US market, or to faster-growing China.’

‘The Washington Post reported that Chinese supercomputer maker Phytium used chips made by TSMC, which is also an important US military supplier, in machinery to test hypersonic missiles for the People’s Liberation Army.’

‘Washington’s moves showed that “the US is pressuring Taiwan and TSMC to support its supply chain” over China, said Paul Triolo, an analyst at consultancy Eurasia Group.’

‘The US last year accounted for over 60 per cent of TSMC’s sales, compared with only 20 per cent to China.’

‘Washington’s efforts to draw TSMC away from Beijing have extended to the chip company moving parts of its supply chain on to American soil.’

‘Su Tzu-yun, a director at the Taipei-based Institute for National Defense and Security Research, believed that a recent escalation in tensions between China and Taiwan meant the island’s tech companies had little choice but to side with the US.’