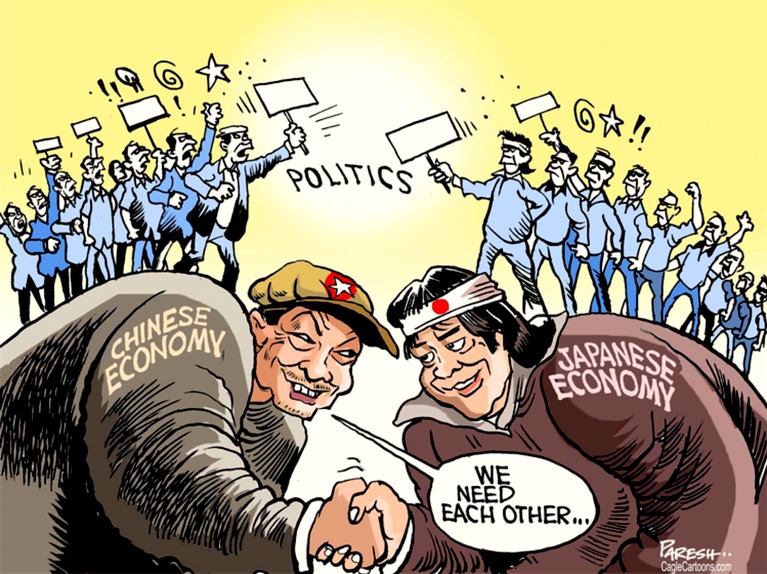 BIG IDEA | At their summit in April, ‘after years of veiled messaging Japanese Prime Minister Yoshihide Suga U.S. President Joe Biden, ‘formally acknowledged that they are working together to deter China’s military power in Asia and compete with China economically.’

‘It would be premature, however, to imagine that Washington has succeeded in drawing Tokyo into firm opposition to Beijing.’

‘Japan may be increasingly alarmed by China’s behavior and willing to criticize the actions of Chinese leaders, but it knows that a fundamental break with China is very unlikely.’

After summit in April between Japanese Prime Minister Yoshihide Suga and U.S. President Joe Biden, many thought that Japan had finally and fully thrown itself in with the U.S.’ effort to counter China.

‘After years of veiled messaging Japanese Prime Minister Yoshihide Suga and U.S. President Joe Biden, formally acknowledged that they are working together to deter China’s military power in Asia and compete with China economically.’

‘The joint statement with the United States is only the latest sign that Suga, who succeeded Abe as prime minister last September, will not revert to his predecessor’s warm diplomacy with China.’

‘The Japanese public, too, has been especially skeptical of China since Beijing began asserting its claims to the disputed Senkaku (known in China as the Diaoyu) Islands in the East China Sea.’

‘It would be premature, however, to imagine that Washington has succeeded in drawing Tokyo into firm opposition to Beijing.’

‘Rather, Japan remains committed to a “mutually beneficial” strategic relationship with China.’

‘Powerful political and economic actors have supported the growing ties with China. Three entities have formed a kind of China lobby in Japan that has worked to insulate the bilateral relationship from political opposition.’

‘Perhaps most important, the Japanese people continue to believe that the relationship with China is important and worth maintaining.’

‘In sum, Japanese business leaders, bureaucrats, and politicians will continue to keep the channels of communication with Beijing open in the belief that, as Suga tweeted after the summit, a stable relationship with China “is important not just for Japan and China, but for the peace and prosperity of the region and the international community.” ’

‘That said, ‘Japan’s China policy is still up for grabs.’