1 | The first U.S.-EU alliance against China 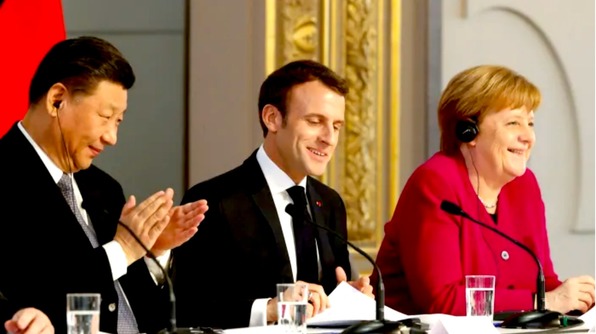 "Europeans will have to step up their reaction against China after insults, intimidation and sanctions against scholars and MPs. This isn't about siding with America, it's about defending European sovereignty against a bully."

'By the time Antony Blinken's plane touched down in Brussels on Monday night,' writes Stephan Lau of Politico EU, 'America's top diplomat had already acquired an unlikely ally in his push for a deeper transatlantic partnership: China.'

As has been often noted, the chief thing that distinguishes President Biden’s China strategy from the previous administration’s is the aim to create coalitions to confront China on specific issues.

Thank goodness for Mr. Biden that China is lending a helping hand.

‘This week Joe Biden made good on his campaign promise to work more with allies to pressure China, coordinating with U.S. partners to impose sanctions over alleged human-rights abuses in Xinjiang,’ says Bloomberg.

As the Editorial Board of the Financial Times notes:

‘The retribution is modest given the crimes.'

Given that China is keen to do its best to prevent the U.S. from bringing the EU into further coalitions – ‘Beijing has in recent years used a divide-and-conquer approach with national capitals to undermine a common EU front’ - you would think that China would have made a measured response. Nope.

‘With its Xinjiang abuses and overreaction on sanctions, Beijing has managed the rare feat of uniting the EU on a foreign policy issue.’

This last point in particular is what makes China’s strong reaction to the EU’s relatively innocuous sanctions hard to understand.