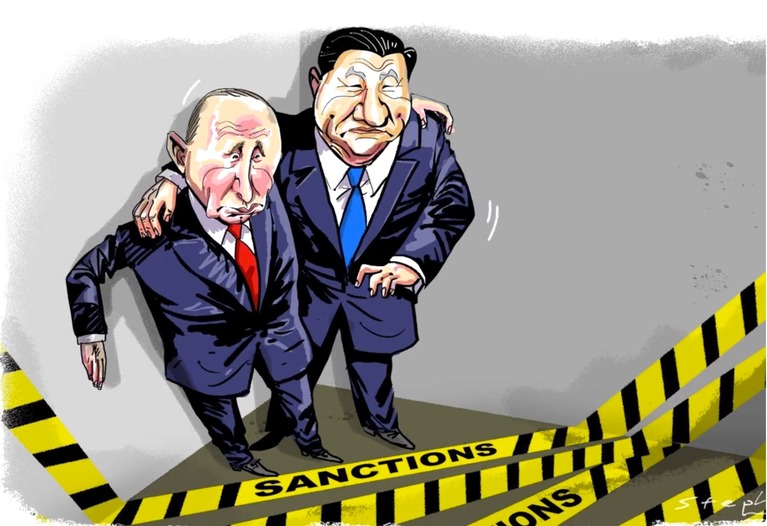 The Russian invasion of Ukraine and the sanctions imposed by the U.S. and its allies have raised questions about the ways China could be impacted.

That’s not all. ‘While the crippling economic blows against Russia are applauded in the West, Chinese leaders watch them with great alarm,’ writes Claremont’s Minxin Pei.

Beijing knows if it is a little too supportive of Russia, China could face sanctions itself.

Minxin Pei again: ‘Although the same type of economic sanctions leveled at Russia would unavoidably hurt Western economies, they could be catastrophic for China in the event of a war across the Taiwan Strait.’ – or not.

‘Many academic studies of globalization’s net benefits suggest that sanctions on China or a break in Sino-American economic ties probably would have a smaller quantitative impact than one might think, at least over the medium to long term.’

In any case, China’s leaders would no doubt agree with him when he writes:

China’s leaders would also no doubt agree with Dr. Pei:

That said, China had already begun on the path to ‘self-sufficiency’ years before the Russian invasion.

But the really tough challenge is becoming independent of the dollar-dominated international payment system and SWIFT.

In the meantime, some contend, China has a payment system, the Cross-Border Interbank Payment System or CIPS, that could make it independent of SWIFT.

It’s answer to the question, ‘Is there an alternative to SWIFT?’:

‘China has CIPS.’ but it’s mainly a settlement system for renminbi transactions that also offers some communication functions.’

Who would have thought that SWIFT could be so interesting?

part one | China. Consider yourself warned.

So far, to avoid the possibility of secondary sanctions and other punishments, as well as the hit to its reputation, China, although not imposing sanctions, appears to be abiding by the sanction regime imposed on Russia.

‘China hasn’t joined western countries in sanctioning Russia and has vowed to continue normal trade relations with Russia, which is seen as a strategic partner.’

‘It’s unlikely that China’s largest state-owned banks would seek to bypass Western sanctions, considering that their international operations require access to dollar transactions, which could be cut off if they were caught via so-called secondary sanctions.’

This, even though, as China’s Foreign Ministry spokesperson Zhao Lijian said at a daily briefing that his country:

But China’s abiding by the sanction regime doesn’t mean that China’s economy is not feeling the impact.

Even without direct sanctions, China is feeling the effect of the Russian sanctions on its economy.

‘Today, both the Ukraine war and an expected series of interest-rate increases by the US Federal Reserve this year have made the external environment much less favorable to growth.’

‘Rate hikes by the Fed – the first of which came on March 16 – will likely further depress emerging-market growth.’

‘China can mitigate these risks to some extent.’

‘But it will be difficult for China to offset these two negative external factors completely.’

The biggest risk to China’s economy would be sanctions on Russian energy.

‘Based on data from 2019 (the last full year before the pandemic), China is Russia’s largest trading partner, accounting for about 14% of Russia’s exports and 19% of its imports.’

‘If the West decided to target Russia’s energy sector, and China replaced its energy imports from Russia with imports from the Middle East or other regions, gas and electricity prices in the United States, Europe, and elsewhere would likely spike further.'

Beijing wants to avoid Russia's outcome if China ends up on the receiving end of sanctions some day. As Minxin Pei writes in ‘China's long game has just gotten a lot harder’:

‘Their country is far more economically tied to the West than Russia is.’

‘The only insurance China has to protect itself against such perils is to sanction-proof its economy.’

That said, China had already begun on the path to ‘self-sufficiency’ years before the Russian invasion.

But the really tough challenge is becoming independent of the dollar-dominated international payment system and SWIFT.

During the U.S.-China trade war, Trump hardliners contemplated excluding China from SWIFT, the main messaging network through which international payments are initiated – and the main currency is the U.S. dollar.

But China didn’t get kicked out. And that’s a good thing.

‘Such an attack would lead to global financial instability, lost national savings for the United States, and redoubled Chinese efforts to create an alternative to the dollar-dominated SWIFT payments system.’

SWIFT is such a strong sanction that it took longer than the initial sanctions to persuade some U.S. allies to act.

To be sure readers get the message:

3 | Wait. Doesn’t China already have its own version of SWIFT?

In Bloomberg’s excellent Quick Take, ‘Why SWIFT Ban Is Such a Potent Sanction on Russia’ (and I’ll add on China), the question ‘7. Is there an alternative to SWIFT?’ is answered:

And another Bloomberg Quick Take, ‘Why China’s Payment System Can’t Easily Save Russian Banks Cut Off From Swift,’ explains more:

‘By size, CIPS is miniscule compared to SWIFT, which has more than 11,000 members and handles more than 42 million transactions a day.’

‘It’s part of China’s strategy to encourage global usage of the renminbi, which remains small compared to the size of China’s economy.’

‘It’s also seen as a way China is seeking to decrease its dependence on the Western financial system and use of the dollar, especially after the U.S. extended economic sanctions on Iran in 2010 and then sanctioned Russia for its invasion of Crimea in 2014.’

‘5. Could CIPS be used to bypass western sanctions?’

‘It would only work if the transactions are in renminbi .’

The problem remains for China that sanction-proofing from being thrown out of SWIFT and having its foreign reserves frozen requires the internationalization of the RMB.

As Dinny McMahon said at one of our recent CHINARoundtables:

‘Since about 2018, China’s developed a strategy that can be probably best considered RMB internationalization 2.0.'

‘But these are the three moving pieces to watch for.’

‘Reducing that vulnerability is very much dependent on how the rest of the world responds to China's domestic changes.’

‘China realizes that its ability to make itself less exposed to that is going to take a lot of time:’

‘That’s largely because so much of what needs to occur isn't in China's hands.’

But as China can see with the Russian sanctions, SWIFT is on the table.

The flip side of sanction proofing is the ability to weather the impact of sanctions – and here, because of China’s position in trade and finance, that means the impact on the world as well as China.

As noted above, Minxin Pei writes in ‘China's long game has just gotten a lot harder’:

These last points are questioned by Harvard’s Ken Rogoff in ‘Can the World Afford Russia-Style Sanctions on China?’. You might recall that Dr. Rogoff and a colleague caused a stir among those who analyze China’s economy when their research concluded:

From his research on the ‘what if’ China incurred Russia-style sanctions, he reports:

‘One recent study found that decoupling global value chains, which would be hugely affected by a reduction in trade with China, would cost the US only 2% of GDP.’

‘Many academic studies estimate a smaller-than-expected quantitative impact from a US-China economic rupture.’

Note: The studies that Dr. Rogoff cites don’t, as far as I can see,  include the impact of financial sanctions like cutting China out of SWIFT.