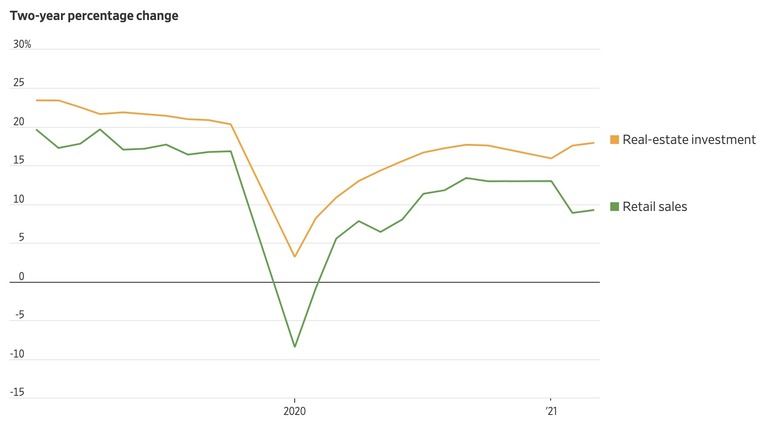 BIG IDEA | ‘If a recovery led by investment in real estate and industrial production, with consumption lagging behind, sounds familiar, it may be because the same could be said of the makeup of China’s growth before Covid-19.’

‘The moving parts in China’s latest growth figures are very similar to those in place before the pandemic.’

‘Chinese economic data for May came in slightly weaker than economists expected, but still seem strong by Western standards. It is best to compare the numbers released on Wednesday to their equivalents from 2019 for a clear picture, since those aren’t distorted by the extremely unusual economic conditions of early 2020.’

‘If a recovery led by investment in real estate and industrial production, with consumption lagging behind, sounds familiar, it may be because the same could be said of the makeup of China’s growth before Covid-19.’

‘Unlike the U.S., where there are many questions around how the huge stimulus might change the shape of the economy, China has followed a well-established script in its pandemic response.’

‘Even the lagging retail-growth figures may exaggerate the underlying strength of the consumer economy relative to previous years.’

‘Two concerns with the shape of the recovery are immediately noteworthy.’

‘The first, as Julian Evans-Pritchard at Capital Economics points out, is that growth in industrial-export sales has slowed.’

‘The second is what precisely is fueling real-estate investment.’

‘China’s recovery has been impressive, but the pandemic hasn’t changed the structural flaws that most concerned economists before Covid-19—and may even have compounded them.’