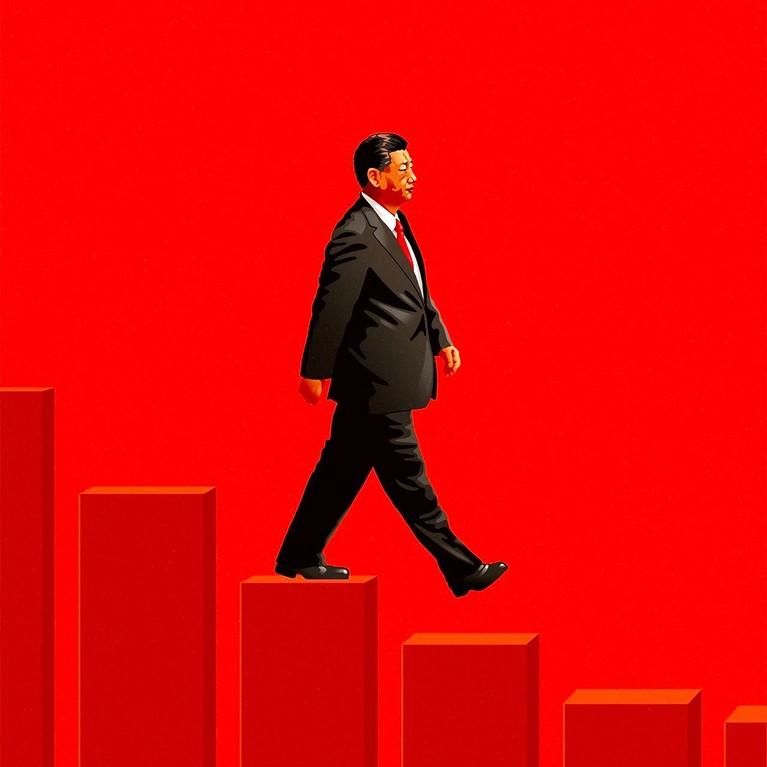 from the cover of The Economist

The Zero Coivd campaign and the ‘New Development Concept.’

And heads up for an important report. The EU Chamber of Commerce in China has just published another excellent and timely report:

China is the biggest emitter, and if you are concerned about whether or not it will be able to meet its carbon goals, you may find this report disturbing.

On the Chinese economy, I’ve never been a bear (or a bull, for that matter). When the echo chamber magnifies an apparent weakness into the coming collapse of China, I ask two questions:

And the answer has always been yes to both, if often with varying degrees of conviction.

Then last week an institutional investor asked me where I saw the bright spots in the Chinese economy – and I realized that, unlike before, I don’t really see any.

Then he asked, ‘What is the biggest problem in China’s economy?’

As if on cue, The Economist this week put the illustration above on the cover.

The lead story, ‘Ideology versus prosperity: How Xi Jinping is damaging China’s economy,’ contends: ‘China’s economy is in danger.’

But, as I went through The Economist’s listing of the woes of China's economy – which repeated those cited by many others – and laid at Mr. Xi’s feet, I began to wonder if I had stumbled into the China bear’s latest echo chamber without realizing it.

2 | ‘Xi has maneuvered himself into a dead-end’

‘Xi has made clear that his success in containing the virus and avoiding the mass deaths seen in other major countries is the legacy he’s riding on heading to the party’s leadership conclave [and on securing a third term there] later this year,’ says ‘China’s Premier Warns of Calamity. But Will Anyone Listen? in Bloomberg.

As Joerg Wuttke, president of the EU Chamber of Commerce in China, notes (and we have published before) in his answer to the question: ‘Do you see any indication that the Zero Covid policy, which is behind the lockdowns, is being reconsidered?’

‘The authorities have made the Chinese population genuinely afraid of the virus.’

‘For the past two years, the party leadership and government have spun the narrative that China has handled the pandemic much better than the decadent West.’

‘President Xi wants to be confirmed for a third term at the 20th Party Congress in the fall, so he cannot change his narrative this close to the finish line.’

‘In short, President Xi has maneuvered himself into a dead-end:’

A more charitable and China-centric view of the Zero COVID policy comes from Jun Zhang of Fudan University in ‘What Justifies China’s Zero-COVID Policy?’:

This brings us to The Economist’s second issue:

The Economist pegs the second of the ‘the twin blows to the economy’ as ‘a series of economic initiatives that form what Mr Xi calls his “new development concept.’ ”

‘Xi Jinping has been advancing a new overarching economic policy framework over the course of this year entitled the “New Development Concept” — a concept which incorporates within it a range of different elements, including:’

‘For many in the international community, as well as China’s own entrepreneurial class, this has been received as a surprising, bewildering, almost scattergun series of announcements — from the micro to the macro.’

The ‘red thread’ gives the hint about what Xi Jinping is up to. Another hint comes from one of my favorite headlines from Bloomberg that appeared soon after investors lost over a trillion dollars in China’s tech ‘crackdown.’

We ‘have told themselves a comforting story,’ it says:

In fact, from Deng to Xi, as the Chinese put it:

And in Marxist theory itself, capitalism is a stage on the inevitable and historic path to socialism.

5 | Deng said so himself

But, as I have written before, when Deng Xiaoping introduced capitalist elements into China’s economic model, he was not abandoning the goal of moving China along the Marxist path to socialism.

Like Deng, Xi Jinping is a true believer, as his writings and speeches (and now his actions) show. Here's just a snippet:

The ‘New Development Concept’ and many other policies demonstrate that, for Mr. Xi, China has achieved such an 'overwhelming abundance of material wealth' that China’s capitalist stage may have reached its use-by date.

‘This move to the left has been reflected in a number of specific domains:

‘None of these things have happened by accident.’

If we have learned anything about Mr. Xi over the past year, it is that he favors health and ideology over prosperity.

So if The Economist (and the others in the echo chamber) is right when it says that the Zero Covid campaign and the ‘New Development Concept' are 'twin blows to the economy'...

And while the impact of Zero Covid may be relatively short-lived, the impact of Mr. Xi’s return to the socialist path will be felt for a very long time, both in China and the world.

Book
'
'
Getting Priorities Straight
—
0
How do you make investment or business decisions in the face of the uncertainties created by Xi Jinping's reshaping China's economy? In this issue, I'll give you a few different ideas on how you might deal with that uncertainty.
1 / 8
Go to
In-Depth