'Is growth in China soaring or slowing?: The answer depends on how you calculate growth' 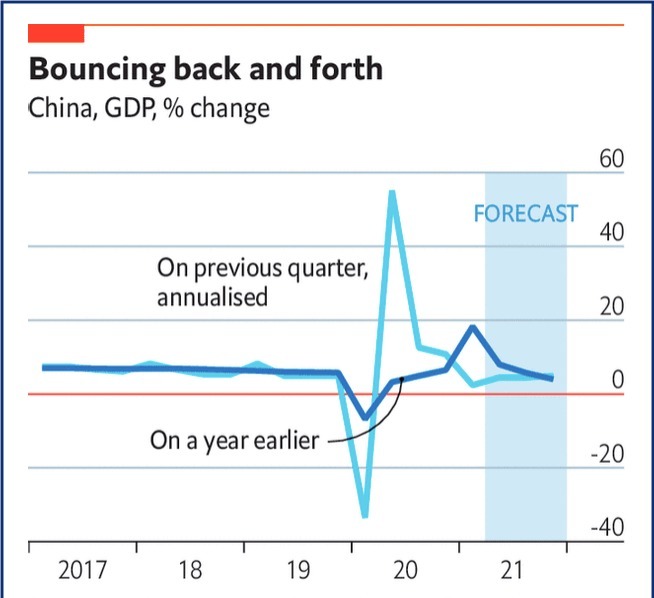 BIG IDEA | ‘China’s GDP for the first three months of the year on April 16th soared to 18.3% compared with a year earlier.

‘It was China’s fastest growth on record, underlining the strength of its recovery. Yet it also illustrates the oddities in how GDP is reported.’

‘The excited headlines were predictable. When China reported its GDP for the first three months of the year on April 16th, growth soared to 18.3% compared with a year earlier.’

‘China’s recovery should be old news.’

‘But because the convention in China is to report GDP in year-on-year terms, it is only now that the recovery makes a dramatic appearance in its most-watched data series.’

‘America and Japan instead focus on growth in quarter-on-quarter annualised terms: what growth would be if the quarter’s pace were maintained for a full year, adjusted for seasonality.’

‘Both methods have drawbacks, especially in times of extreme volatility.’

‘Annualised rates can mislead when output suddenly jumps or plunges; they implicitly assume that a one-off event repeats every quarter for a full year.’

‘There is a third way, which is to present quarter-on-quarter growth, without annualising it. This is what most European countries emphasise.’