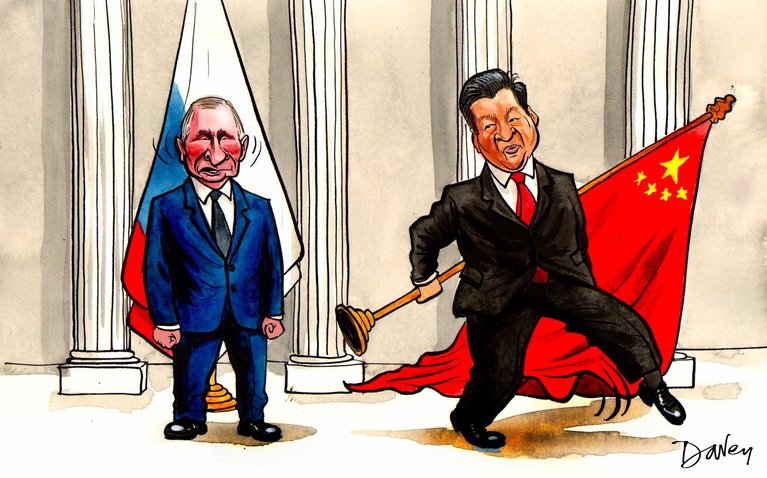 China is in a bind.

Some say China is operating in an international order that has already collapsed under the weight of the Ukraine invasion.

They note a country’s justice system doesn’t break down just because someone commits a murder.

If this is right, then the Ukraine invasion that his energized the world order is a setback for Xi Jinping’s own efforts to shape it to his liking or to impose a new order led by China.

All by way of saying, there is a lot of uncertainty.

Tong Zhao of the Carnegie Endowment lays this out in a series of tweets (thanks to Jim McGregor for pointing out this thread) that include: ‘China faces two strategic paths going forward:’

There is of course an Option 3: Navigate between the two.

So far that’s what we’re seeing.

‘China’s response to Russia’s war against Ukraine has been heavily scrutinized and criticized.’

‘China’s stance is much more nuanced.’

So far, then, China is throwing its lot in with the existing international order.

Not long ago I published here 'Under Construction: Two (Opposing) World Orders.’

In it, I quoted Michael Beckley of Tufts in ‘Enemies of My Enemy: How Fear of China Is Forging a New World Order,’ who wrote:

For some, the invasion of Ukraine proved this right.

‘The world is witnessing the largest land war in Europe since the Second World War.’

And David Ignatius in ‘Putin’s assault on Ukraine will shape a new world order’ wrote:

On the other side is retired U.S. Navy admiral and former NATO commander in Europe, James Stavridis, quoted in ‘The War in Ukraine Holds a Warning for the World Order,’ who says:

On that view, the liberal world order is functioning as intended.

Mr. Putin’s breach of international law didn’t break the international order, any more than the domestic justice system breaks down when someone commits murder.

‘Domestic law does a good job at policing legal violations, but it is not foolproof.’

And it’s the same with international law:

‘For hundreds of years, Plan B was war.’

‘War was the legally permissible way that states had for righting legal wrongs done to them.’

‘Since World War II, the number of interstate wars prohibited by the charter has diminished drastically. That, too, is a sign of the system’s strength.’

‘Some analysts have asked, if sanctions didn’t stop Putin from invading Ukraine, then what difference do they make at this point?’

Yet China is not ready to condemn or deter Russia.

As for the community of nations, The Economist points out:

So while the liberal world order may have gotten more oomph lately, its appeal is far from universal.

By straddling support for the international order and support for Russia, China could be playing for time.

This from ‘Xi Jinping places a bet on Russia: China’s backing for Vladimir Putin’s war is all about its contest with America’ in The Economist:

‘In Beijing, scholars and high-ranking government advisers predict that today’s shows of Western unity will fade sooner or later, as sanctions fail to break Russia and instead send energy prices soaring.’

‘If Mr Xi believes his own rhetoric and is sure that China will secure the might-is-right world order he seeks, then Ukraine’s agonies matter less to China than might be supposed—as long as Chinese firms are not hit by sanctions on Russia, and trade ties with Europe remain intact.’

And pretty perilous for the rest of us, as well.