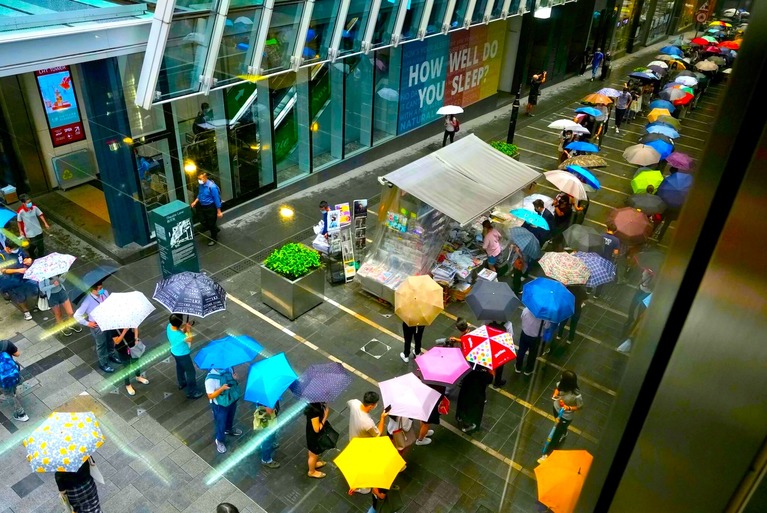 A line to buy the last Apple Daily on Thursday. One purchaser said he was looking for “memories of the freedom we used to have to say things in Hong Kong.”
Book
Interview
'
'
|
|
—
Interview
|
|
—
—

BIG IDEA | Apple Daily was much more than a newspaper. To its fans, it was a defender of freedoms. To its foes, it was the defiler of national sovereignty.’

SCMP. ‘Is Apple Daily more than a newspaper?’

‘Yet, there was a rare consensus among both sides: Apple Daily was much more than a newspaper.’

‘In the end, its foes had the final say, media scholars noted on Wednesday, as the tabloid-style publication shut its digital operations at midnight and its presses rolled out its final edition for Thursday.’

FT.  ‘Hundreds of Hong Kongers queued for hours to buy the final edition of Apple Daily on Thursday morning, a day after the pro-democracy newspaper closed following the arrests of senior journalists and the government freezing its assets.’

‘Its closure has been viewed as a marker of the deterioration of civic freedoms and crackdown on political opposition in the city after China imposed a tough national security law last year following pro-democracy protests in 2019.’

‘Hong Kong authorities have accused the paper and its executives of endangering national security by publishing calls for sanctions against the city and its officials following the 2019 protests.’

‘The newspaper’s founder, 73-year-old media tycoon Jimmy Lai, has been a constant target of the Chinese Communist Party, which has branded him a “riot leader,” “secessionist” and “traitor.” ’

‘Lai was among the first to be arrested under the security law and has also been charged for his role in other pro-democracy protests, including some that were peaceful.’