'Coup Puts Myanmar at the Center of the U.S.-China Clash' 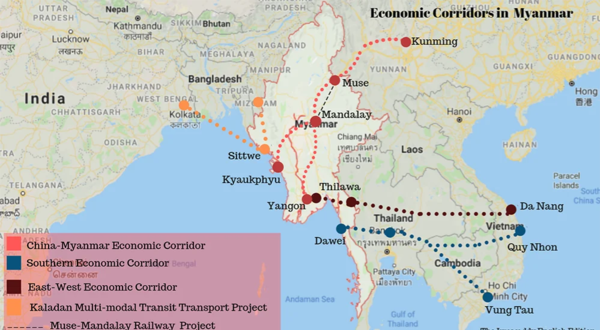 Burma: At the Center of the U.S.-China Competition

‘Chinese oil and gas pipelines snake across Myanmar from China’s landlocked Yunnan province to the Bay of Bengal—a route that Beijing wants to transform into a broader economic corridor with road and rail connections.’

‘Myanmar’s transition from military rule toward democracy that began a decade ago was trumpeted as a strategic victory for Washington in China’s backyard.’

‘The takeover, coming against the backdrop of a deepening U.S.-China rivalry, pits the foreign-policy strategies of the two powers against each other.’

‘The U.S. has framed its approach to Myanmar as a push for democracy and human rights.’

‘President Biden pressed the Myanmar military to relinquish power and raised the possibility of imposing sanctions.’

‘China took a muted stand, expressing hope that all sides would “properly manage their differences.” ’

‘For Beijing, neighboring Myanmar offers a strategic gateway to the Indian Ocean, and it is a source of minerals, timber and other resources.’

‘For Washington, Myanmar is a place where U.S. officials saw an opening to turn a pariah into a partner, score a win for democracy and erode China’s dominance.’

'In Myanmar, aides to Ms. Suu Kyi warned Western ambassadors that pressure on the country was pushing it closer to China.'

In January last year, China’s leader Xi Jinping made a visit to Myanmar, the first by a Chinese head of state in almost two decades.'