'China’s economy springs back from pandemic hit with record growth' 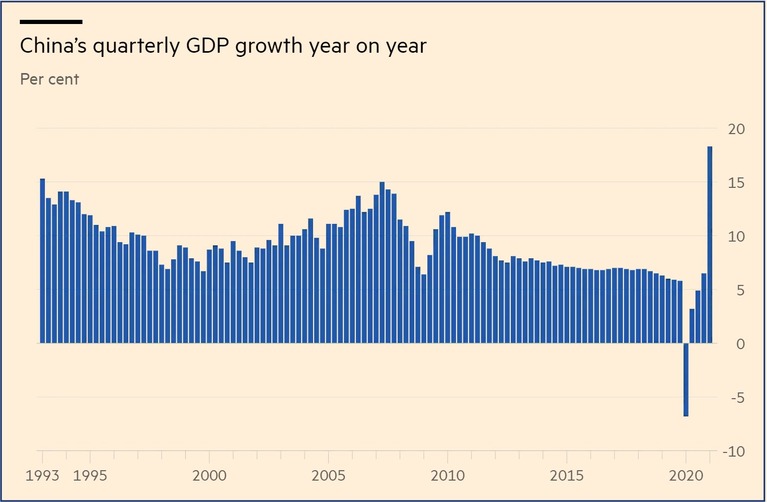 BIG IDEA | “The headline year-on-year data really doesn’t tell us the story of how the economy has performed in the first quarter . . . in fact that performance was a bit disappointing. The silver lining is that March was better than the first two months.”

‘China’s output leapt 18.3 per cent year on year in the first three months, the fastest rate since records began in the early 1990s.’

‘ “We are confident that the current recovery trend will continue throughout the year,” Liu Aihua, a spokesperson for the NBS, said at a briefing.’’

‘Eswar Prasad, a China finance expert at Cornell University, said that even after taking into account the “phantom effect” of the low-base comparison from last year, the first-quarter figure was “clear confirmation of the resilience and momentum of the Chinese economy”.’

‘China benefited from being the first major economy to emerge from lockdown, although the US is catching up rapidly, boosted by the Biden administration’s $1.9tn fiscal stimulus.’

‘In contrast, the eurozone is still grappling with rising coronavirus infections and national lockdowns which are expected to drag the bloc into a double-dip recession in the first three months of this year.’

‘The IMF last week forecast that by 2024, the US would be one of the few major economies to be bigger than it would have been if the pandemic had not taken place, based on earlier estimates — while it predicted China and Europe would both still be smaller.’