China Goes All 'Wolf Warrior' on the U.S. & the EU 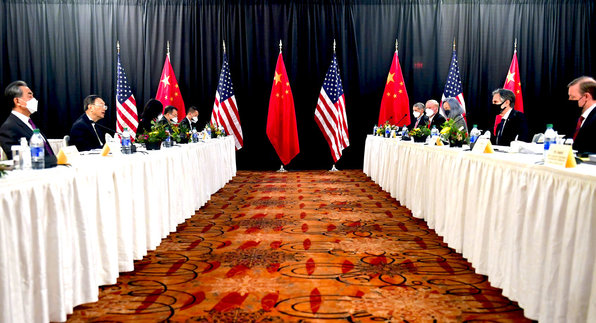 With the Biden China team pretty much in place and the first face-to-face skirmish with China over…and with China’s thumbing its nose at America and its allies in ever new and changing ways, we’ve entered a new and fast-moving phase of the U.S.-China relationship.

Enter the ‘Biden China Tracker’ that will analyze these from both sides as they happen.

Today is the Tracker’s first issue.

Neither is objectively significant.

The first is a meeting, in Anchorage, between the U.S. and China since President Biden took office that resolved nothing but kicked off with some pointed comments by each side about the other’s shortcomings.

The second is China’s slapping disproportionate retaliatory sanctions on the EU for joining with the U.S., UK, and Canada in imposing carefully calibrated sanctions against four Chinese officials said to be part of the Uighur suppression (or genocide, if you wish).

Ian Bremmer of the Eurasia Group nicely summarizes the import of the U.S.-China meeting:

As for the Chinese sanctions on the EU, if you found Yang Jiechi’s dressing down of the U.S. in Anchorage a little startling, wait until you read the comments (in the post below) on the mutual sanctions from China’s Minister of Foreign Affairs. Here’s a taste:

China must have weighed the satisfaction of berating and threatening the EU against the likelihood of its actions breaking down the EU’s reluctance to join further coalitions to confront China – and decided it was worth it.

In any case, these two events have allowed the U.S. and China to stake out their fundamental positions and strategies.

In the last section of the 'Biden China Tracker' is a nifty chart + links to short bios of the Biden China team.

Now please read today's ‘Biden China Tracker,’and let me know if the insights in it are helpful. Thanks!