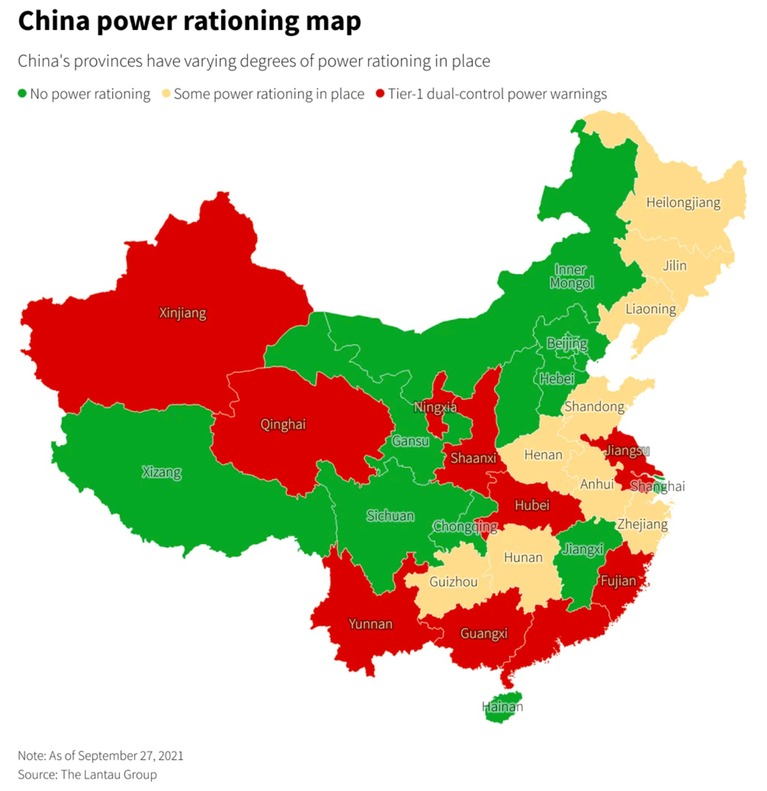 ‍‘Over the next six months or more, the energy crunch in China will be an even bigger challenge than Evergrande. Will make the Evergrande problem look tiny and has huge global implications. The lights go out in China!’ one experienced and very well-respected reader of long residence in China wrote to me in response the last issue on Evergrande.

‘The electricity crunch has laid bare one of China’s strategic weaknesses: It is a voracious, and increasingly hungry, energy hog,’ writes The New York Times’ Keith Bradsher in ‘China’s Power Problems Expose a Strategic Weakness.’

If you do business in China or depend on China as part of your supply chain, or if you are an investor in China or Chinese financial products, take heed.

BTW, Trivium China is having another of its terrific Flash Talks – this one on ‘China's systemic power disruptions’ on October 21 at 9:30am EDT. A don’t miss.

Read on for more about a few aspects of the power shortage in China and the world.

And be sure to send me your take.

1 | The Scope of China’s Power Shortage

These the shortages began as early as May. In the ‘European Chamber Stance on China’s Energy Management Measures,’ the EU Chamber of Commerce in China writes:

Reuters reports ‘Rationing has already been in place in at least 17 of mainland China's more than 30 regions since September, forcing some factories to suspend production and disrupting supply chains.’

Broadly speaking, as countries began recovering from the pandemic, global demand for products from the China – the world’s top manufacturer - suddenly and unexpectedly shot up this year.

3 | A Note on China’s Ban on Australian Coal

In 2020, Beijing began a full-out bullying campaign against Australia.

One part of China’s pressure campaign to hurt Australia was an informal ban on its coal.

Australia has hung tough – good on them.

IHS Markit on September 29 in ‘Tight coal supply and climate-related control result in wide-spread power outages in China’ reported: ‘China is currently going through one of the most significant power outages in a decade.’

‘So far 12 provinces have identified coal supply shortage as the key reason behind for power rationing or rolling blackouts.’

‘For these 12 provinces, shortfall in coal-fired power generation - stemming from fuel shortage and skyrocketing coal prices - is a chief cause for power outages.’

‘Meanwhile, policymakers have demanded coal-fired power tariff remain on par with on-grid benchmarks, which were calculated during much lower coal price periods.’ So coal-fired power plants are losing money and don’t want to produce.

‘A series of supply shocks have contributed to the coal price surge.’ And slowing energy production.

‘The European Chamber believes there are several reasons why electricity is suddenly in short supply in China,' writes the EU Chamber of Commerce in China provides an on-the-ground explanation for the shortage is in tits ‘European Chamber Stance on China’s Energy Management Measures,’:

‘This situation is being further exacerbated due to both the current energy mix and deficient infrastructure: the power supply from new energies (wind and photovoltaic) is unstable, and is not sufficient to make up for the shortfall of thermal power and hydropower generation.’

‘Recent arbitrary actions taken by local authorities have lacked transparency and consistency, and furthermore have no legal grounds.’

Now multiply that by the number of Chinese companies affected.

‘The authorities have announced a national rush to mine and burn more coal, despite their previous pledges to curb emissions that cause climate change.’

But ‘the winter heating season officially began on October 15th in the country’s northeast and continues into north-central China next month.’

‘ “They have to sacrifice something to make sure households will have heat and power,” said Chen Long, a co-founder and partner of Plenum, a Beijing economics and politics research firm.’

And there goes GDP for China and with it uncertainty about and interruptions of supply chains for the rest of the world.

China was hit first. But it is just one country or region facing an energy crunch and its implications.

‘The economic recovery from the pandemic recession lies behind the crisis, coming after a year of retrenchment in coal, oil and gas extraction,’ says Will Englund in ‘An energy crisis is gripping the world, with potentially grave consequences: How China and Europe are catching the brunt of it,’ in The Washington Post.

“COVID-Green” energy crisis, is what J.P. Morgan researchers are calling it, says The Hill.

As someone who doesn’t follow the ins and outs of the crucial battle against climate change, two things here surprised me.

As The Economist – its cover headline this week is ‘The Energy Shock’ - points out:

‘This week Li Keqiang, China’s premier, said the energy transition must be “sound and well-paced”, code for using coal for longer.’

‘Next month world leaders will gather at the cop26 summit, saying they mean to set a course for net global carbon emissions to reach zero by 2050.’

Politicians of the world, the ball is in your court.