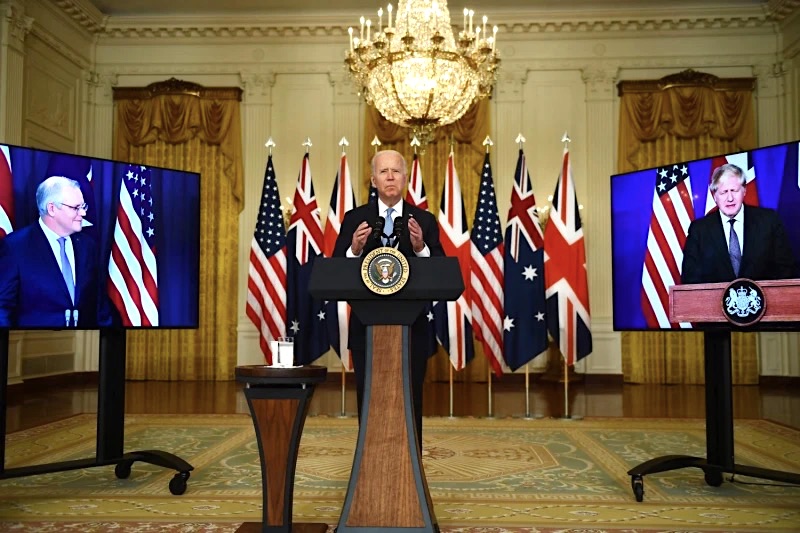 ‍In case you passed over the news of AUKUS, the new strategic alliance among the U.S, the U.K., and Australia, here a few headlines to encourage a deeper look:

Is this the start of a new world order?

To become a new world order, more of those countries, especially in the EU – and the EU itself – will have to get on board.

BTW the leaders of the QUAD – the U.S., Australia, Japan, & India – will meet this week at the White House.

However much China may seem to have punched the U.S. in the month – and on that Mr. Swan is correct - theory and practice came together last week.

AUKUS, as you have no doubt read, is a new Indo-Pacific security alliance among the U.S., the UK, and Australia – the anglosphere minus Canada and New Zealand.

With this, Australia will become the 7th nation to have such weapons, along with the U.S., the UK, France, India, Russian, & China.

The subs won’t be delivered for at least a dozen years.

To make the deal, Australia scrapped a contract with France to supply conventional subs.

Throughout all the announcements, the three nations’ leaders never mentioned China as the target of AUKUS.

And China, quite rightly from its point of view, squawked.

‘In its previous calculations, China’s military only had to contend with possible interference from the US and Japanese navies as it sought military dominance over its near seas, especially in the waters around Taiwan,’ wrote the Financial Times:

‘“There is not much the People’s Liberation Army can do to counter this new capability,” he said.’

Vipin Narang, a Massachusetts Institute of Technology professor who studies the use of nuclear weapons and delivery systems among major powers, told The New York Times:

Oriana Skylar Mastro, who is a fellow at the Freeman Spogli Institute for International Studies at Stanford University and at the American Enterprise Institute, told The New York Times:

Here’s why Australia is willing to take those risks.

3 | What Got Into Australia?

Of the many headlines that have appeared since AUKUS was announced, one of my favorites is from The New York Times:

So why make that bet now? I’ve watched Australia’s relations with its biggest natural resource buyer (and major mine investor), China, because of the interest in commodities of my hedge fund clients.

In 2015, Australia and China agreed to a free-trade deal and that led to record Chinese investment in the country the following year.

Then Australia did the unthinkable:

And China went all ‘wolf warrior’ on Australia:

In the face of this bullying, Australia has hung tough.

‘ “I’m sure Beijing will not like this development but what do they expect? It’s obviously going to be the case that the consequential countries in the region will seek to strengthen themselves in order to deal with a more aggressive China, and frankly that’s what happened with this announcement.” ’

If other Asian countries begin to stand up to China, this pretty much sums up why.

4 | What Does AUKUS Mean For China?

Here’s a view from China from Li Haidong, a professor at the Institute of International Relations of China Foreign Affairs University, who told the Global Times [a Chinese Communist publication] that AUKUS is at the core of the US alliance system to contain China with extreme hostility, and it should not be underestimated.’

Note: Keep a sharp out for alliances and strengthening of relations among Asia countries, some with no U.S. involvement whatsoever.

If AUKUS is the start of a new world order, the order will be inspired by but not always led by the U.S.