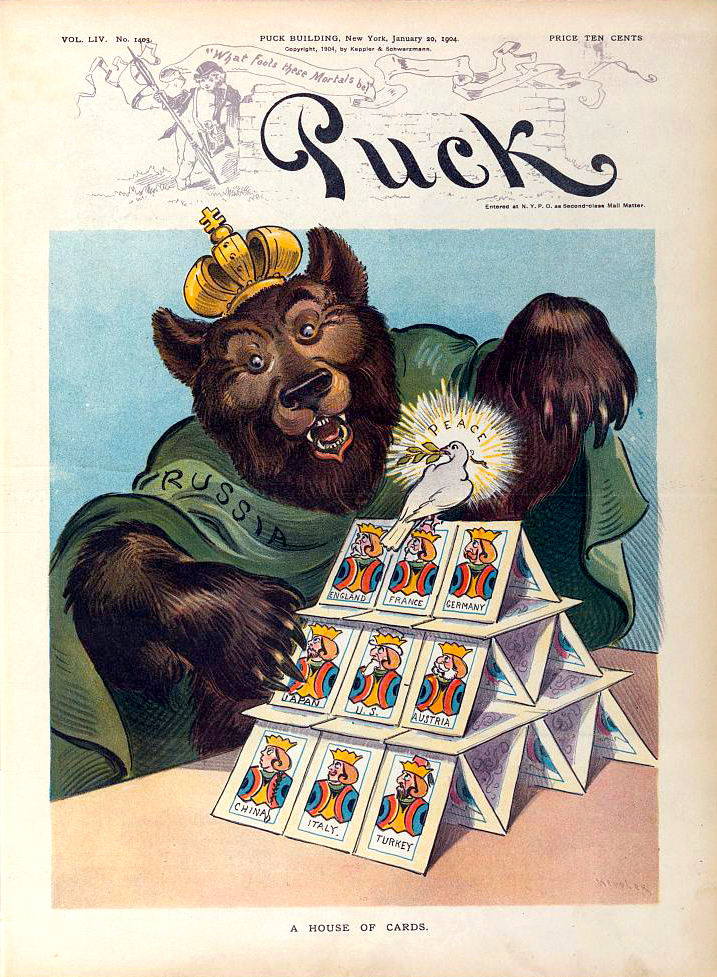 The Face Off
Book
Interview
'
'

Many have written that the Ukraine invasion will distract the Biden administration from its focus on China.

I am by turns appalled to see a free people about to be subjugated by a tyrant and elated by the incredible courage of Ukraine’s leadership and people.

As the 1904 cartoon from Puck magazine shows, this isn’t the first time in the past 100 or so years that Russia has shattered the peace. [Or has been defeated, as it was in 1905 by the Japanese in the Russo-Japanese War.]

The same can’t be said for his buddy, Xi Jinping.

In 1997 George Kennan called the expansion of NATO into the former Warsaw Pact countries 'a fateful error.'

‘Xi and Putin were closely allied with Xi as the older brother.’

‘At the same time, the US and Europe were quite far apart.’

‘Unfortunately, Putin may achieve his military objective but politically he has weakened not only himself but also Xi Jinping.’

There’s a lot to unpack in Dr. Soros pithy statement.

[BTW, ‘Dr. Beckley’s predictions’ refers to my quotes from Michael Beckley of Tufts’ ‘Enemies of My Enemy: How Fear of China Is Forging a New World Order’ in the last CHINAMacroReporter, ‘Under Construction: Two (Opposing) World Orders,’ which included: ‘The international order is falling apart….There are only two orders under construction right now—a Chinese-led one and a U.S.-led one….And the contest between the two is rapidly becoming a clash between autocracy and democracy.’]

Especially interesting is Dr. Soros’ comment that ‘the invasion will drive [Russia and China] apart.’

Remember the primary motivation for President Nixon’s opening to China 50 years ago was to play the ‘China Card’ against the Soviet Union during the Cold War.

Just a few weeks ago, that relationship looked stronger than ever.

‘Mr. Xi’s calculus in signing on to a deeper partnership with Russia’ included ‘the persistent brushing off of the invasion risks,’ according to The Wall Street Journal’s Lingling Wei in ‘China Adjusts, and Readjusts, Its Embrace of Russia in Ukraine Crisis.’

‘ “After that statement that ties Xi so closely to Putin, the U.S. and others are bound to punish China for enabling Russia’s aggression,” says Susan Shirk, a former deputy assistant secretary of state who now leads the 21st Century China Center at the University of California San Diego, quoted in ‘ “Abrupt Changes”: China Caught in a Bind Over Russia’s Invasion of Ukraine’ by The New York Times’ Chris Buckley.

You have to wonder if Mr. Xi feels the same way.

Here is more on why the Ukraine invasion may drive Russia and China apart.

‘For more than a decade, Xi Jinping of China and Vladimir V. Putin of Russia have forged a respectful, perhaps even warm relationship, reflecting the deepening ties between two world powers that share common cause against American military and economic might,’ writes The New York Times’ Steven Lee Myers in ‘Ukraine Invasion Tests the Ties That Bind Putin and Xi.’

Mr. Buckley again: ‘Russia’s war has put its partner Beijing in a severe bind, including over where it stands on countries’ sovereign rights.’

‘Unless the Ukraine crisis is resolved, China will continue performing verbal contortions to try to balance its solidarity with Russia with its declared devotion to the sanctity of the nation-state, experts and former diplomats said.’

And Yu Jie of Chatham House in ‘War in Ukraine is a severe test of China’s new axis with Russia’ writes:

‘Beijing will have to consider the balance sheet for this current alignment carefully.’

Remember Mr. Putin has been a rogue player for a long time, presiding over a nation whose better days appear to be behind it and - except for oil and nukes and hackers and a willingness to invade a neighbor unprovoked - doesn’t have much of an international footprint or future.

Just as Prince Hal broke with Falstaff when he became King Henry V, Mr. Xi may have to do the same one day with his best buddy.

4 | The International Order is All Right.

Dr. Soros doesn’t specify which of Dr. Beckley’s predications has been upended.

I wrote about that a week or so ago before the Ukraine invasion.

Along with the rest of the free world, I watched, rapt, at the speeches by allies and others at the UN Security Council condemning Russian aggression.

And many backed up their words with actions.

Still to my mind, we are still way short of the sanctions we should impose – and of the countries who should be imposing them.

Dr. Soros mentions how the U.S. and Europe ‘were quite far apart,’ but ‘this has also turned around’ with Mr. Putin’s invasion of Ukraine.

But what if Estonia weren’t a NATO member in the first place?

Now, though, most of the former Warsaw Pact nations – not the former members of the USSR itself, like Ukraine - are NATO members.

And this is one of Mr. Putin’s complaints and purported motivation for invading Ukraine: NATO - after it promised not to, he asserts – expanded closer and closer to Russia's border, imperiling its security.

My hero, George Kennan, the architect of America’s ‘containment policy’ against the USSR, called that expansion ‘a fateful error’ in a 1997 New York Times op-ed of the same name. He wrote:

To that extent, he was right.

What Mr. Kennan didn’t factor into his analysis, however, was the other part: The emergence of a Vladimir Putin, whose motivation, beyond security, is to reclaim, as best he can, the territory of the Soviet Union.

Without NATO’s ‘fateful error,’ we would now be waiting to see which countries from the former empire Mr. Putin will decide to pick off next.

Instead, maybe not long from now, I hope, we will be calling Mr. Putin's invasion a fateful error.